Written by fe Bureau | New Delhi | Updated: Jul 31 2010, 07:45am hrs
The Reserve Bank of India(RBI) has imposed a penalty of Rs.5.lakh each on two top banksICICI Bank and Standard Chartered Bankfor violation of the guidelines on Know Your Customer (KYC)/Anti Money Laundering (AML) standards. Both the banks have been fined in exercise of powers vested in RBI under the provisions of Section 47(A)(1)(b) read with Section 46(4) of the Banking Regulation Act, 1949.

ICICI Bank has been penalised for violation of the guidelines on Know Your Customer (KYC)/Anti Money Laundering (AML) standards issued by Reserve Bank of India on November 24, 2004. The RBI had issued a showcause notice dated April 9, 2009 to the bank, in response to which the bank had submitted written replies.

On a careful examination of the banks replies and the oral submission made during the personal hearing held on August 3, 2009, the Reserve Bank of India found that the violation was conclusively established and the penalty was accordingly, imposed.

The penalty on Standard Chartered Bank has been imposed for not furnishing within the stipulated time information pertaining to a foreign currency loan facility arranged by the bank to an offshore, special purpose vehicle (SPV), thereby contravening provisions of Section 27(2) of the Act . 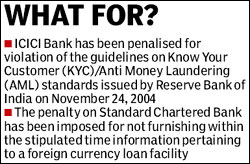 The violations referred to by RBI in its letter were in respect of a single customer account, for opening of which the bank has obtained a government issued identity card (driving license) and introduction from an existing customer. RBI concluded that the substitution of introduction (by an existing customer) for address proof was not in accordance with RBI guidelines. clarified an ICICI spokesperson.