Written by Sitanshu Swain | Mumbai | Updated: Mar 5 2011, 08:30am hrs
In a huge policy shift, public sector banks (PSBs) will get the right to reward their best employees and also lay off their worst performers, under a plan approved by the government.

The performance management system has been adopted, in principle, by the banks as part of their recent tripartite wage negotiations agreement with bank employees and the government.

It will mean each bank will be able to link part of the salary of their employees down to the junior-most branch manager level. Two sources connected with the development confirmed the plan.

To start with, the performance management system will be restricted to officer-level employees only. This itself will be a huge change for the banks, where security of tenure and even salary levels, irrespective of performance has been the rule so far.

As per the latest statistics on scheduled commercial banks in India released by the RBI on Friday, officers formed just over 40% of the total bank employees of 8,69,412 (for only public sector banks, the percentage will be somewhat lower).

The government has already begun a scheme under which the chief executive of public sector banks receive part of their salary as incentive pay, linked to the profit margin of their banks.

The performance management system will extend the same principle lower down the order. 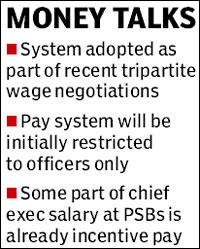 The incentive plan is expected to push the level of performance in the public sector-dominated banking system in India. RBI statistics show total outstanding credit from the sector is just Rs 36 lakh crore as on end January 2011 (just over 50% of the GDP for 2010-11 at current prices).

Explaining the system, one of the sources said all executive employees of a bank will be graded on a scale of performance, to create a statistical bell curve (normal curve) where most of them would be concentrated around the middle. The objective is to reward among them those whose performance exceed the mean and put under notice those who were clearly at the tail end of the curve. RBI statistics show business per employee earned by public sector banks as on March 31, 2009 was Rs 9.47 crore, that compared favourably with that of all banks, at Rs 8.73 crore. But the ratio of wage bill to total number of employeess was higher for public sector banks as on March 31, 2010 at 11.56%, compared to 8.42% for new private sector banks but better than foreign banks at 12.95%.

Reiterating that trade union issues will make it difficult to bring non-executive employees under the programme too, a source said the government was not keen to extend the programme to them. Also, with increasing adoption of technology platforms in banks, the role of the non-executive cadre has been reduced. The basic guidelines for the programme originate from the report of the Administrative Reforms Commission in 2009 which enunciated this principle for government employees.

Accordingly, the plan was approved by the department of public enterprises, the nodal department for the 243 public sector companies of India, but has not been implemented so far.

Sources said the government does not expect any opposition to the move which will be rolled out as part of the human resource development in the public sector banks. The chief of a leading public sector bank said on condition of anonymity: "Though we are already allowed by the government to part 1% of our profit for staff incentive schemes, still, I do feel that more incentives are needed to recognise talent. Also, it will help us differentiate those staffers who do exceptionally well, those who surpass targets and those who are not doing well and even those that are having below than average performance. It will result in getting more contribution from the employees who are doing well, which will finally help increase the business of the bank." He suggested that there was need to develop leadership skills among various people in the banking industry and developing a career and succession plans so as to find out the future CMDs and Eds for PSBs. "Also, there is a need to build up new skills, conceptually and practically as well," he said.

Another CMD of a PSB said that the incentivisation scheme among the PSB employees must be liberalised. Any such scheme will motivate and help get more business. Abroad, there is a system of giving stock options and making them the shareholders, but it will not be possible in the present system in the country, he said. "Again, it should not be like carrot-and-stick. Incentivising performers is alright; but you cant punish those that are not performing. They should be given their basics, he said.