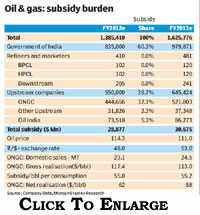 Downside risks to net oil realisation: We currently estimate overall subsidy at R1,625 billion if ONGCs share is maintained at 32.1%; we see net realisation falling to $58/bbl from our current assumption of $60/bbl. This implies downside risk of approximately 5-7% to our earnings. We highlight that subsidy-share mechanism remains ad hoc; the share for the full year is typically finalised only in the last quarter of the yearresulting in volatility in reported quarterly results. 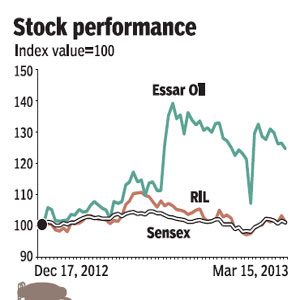 Highest reserve accretion in the last two decades: ONGC reported ultimate reserve accretion of 84.13 (617mboemillion barrels of oil equivalent) with an impressive reserve replacement ratio of 1.79 in FY12 compared to 1.76 in FY11. During FY12 ONGC made 23 exploration discoveries.

What does this mean for our numbers Based on our Q4FY12 forecast, we see downside risk of 5-7%. However, we maintain our estimates for now.