Written by Sajan C Kumar | Chennai | Updated: Feb 11 2010, 08:25am hrs
The Indian solar photovoltaic (PV) market has come of age in the last two to three years, growing from a ten-member sector to a well-organised market with more than 30 world-class PV module and cell suppliers.

The aggregate module production capacity rose from less than 60 mw in 2005 to more than 1 gw in 2009, positioning India as a possible major manufacturing hub for the global solar PV market.

A new analysis from Frost & Sullivan on the countrys solar PV market shows that the aggregate module production capacity in the market, which stood at 972 mw in 2008, is estimated to reach 2,575 mw by 2015.

The market can look forward to large-scale private investments across the PV value chain, especially in the production of polysilcion feedstock, silicon wafers, PV modules and cells and balance of system components.

The Centre has added impetus to the market by promoting solar energy to narrow the power deficit in the country. The Jawaharlal Nehru National Solar Mission (JNNSM), announced in 2009, is expected to infuse much-needed competitiveness in the domestic market. This programme is mainly aimed at the wide-scale deployment of solar farms, roof top-based generation, and rural electrification. 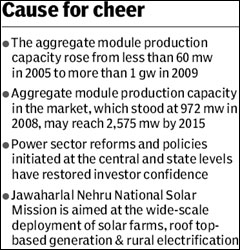 The Indian solar PV market is likely to grow in terms of PV modules and cell exports to various developed nations in the world, said Nayak. In fact, up to 75% of the total module production in India is anticipated to find its way to different solar markets in the EU in the next two to three years.

Despite robust backing by the government, the market is hindered by the high capital expenditure and the risks posed by the lack of grid parity of large solar farms. Market participants will have to sort out the affordability issue if they desire wide-scale deployment of rural electrification programmes. The country also lacks a well-developed transmission and distribution network for evacuation of solar power from remotely located plants.