After Suzlon Energy requested holders of its foreign currency convertible bonds (FCCBs) for an additional 45 days to repay $360 million, earlier this week, Moser Baer said it will restructure FCCBs worth $88.5 million due on June 21. 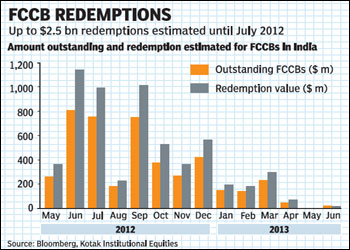 FCCBs worth nearly $5.5 billion are due to redeemed this year and with stock prices having crashed over the last four to five years, there is no chance of the bonds being converted. As such, companies are being forced to redeem the bonds or refinance them through borrowings elsewhere. An estimated $2.5 billion worth of FCCBs are maturing between May and July this year, while the amount for the full year is pegged at around $5.5 billion.