Written by Ashish Sinha | Rajat Guha | Rajat Guha | New Delhi | Updated: Apr 30 2010, 05:18am hrs
The ongoing government probe into the alleged financial irregularities in the Indian Premier League (IPL) has now put the entire bidding process of IPL-I, carried out by suspended IPL commissioner Lalit Modi, under the scanner due to narrow margins between the winning franchises and those who lost out.

In a few cases, the winning bids for the franchises were ahead by less than Rs 50-55 crore from those who lost out, a source said. Unless there was some sort of guidance provided from within the IPL, its unlikely that the difference between winning and losing bids will be range bound, an official told FE.

The probe is looking into bidding documents of all the eight teams and comparing them with the financials of those who lost out. The probe is also looking to establish any links between Modi and the winning franchises and his powers of influencing the bidding process before IPL become a huge success.

Sources close to the development, which took place during IPL-I in 2008, have told FE that a Delhi-based corporate biggy had lost the bid for one of the franchises to a company with a very less margin, owing to a wrong advice from people who are close to IPL and BCCI. In return, the losing firm was later associated with the IPL in a different capacity, sources said. 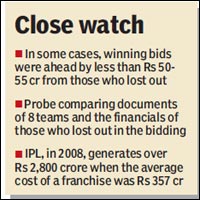 Overall, IPL in 2008 had managed to generate over Rs 2,800 crore from the eight franchises when the average cost of a franchise stood at Rs 357 crore.

A full-fledged investigation into the bids of all suspected franchises by the officials would lay bare the truth about the rigged deals, the government feels.