Women are increasingly being priced out, says Akhilesh Tilotia of Kotak Secs. (Reuters)
Over the past seven years, India has strongly economically implemented a minimum-wage regime via MGNREGA: We hypothesise that this may have driven rural women out of the workforce leading to jobless growth. Basic economics tells us that an artificial floor or cap on prices leads to the misallocation of resources: minimum-wage regulations drive out workers from the labour market whose productivity is below the wage. Skill development is the key to making the labour force productive. 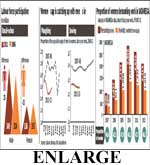 In two of our earlier notes dated July 10, 2012, and June 27, 2011, we had asked the question Where have all the girls gone Both the NSSO and the Labour Bureau surveys pointed out the low or declining labour force participation of women especially in rural India (see table). Our earlier notes only pointed out these trends as there was no clarity on why women were dropping out of the workforce. Some experts thought women may have started spending more time on education and skill development, or the data collection itself may have been faulty.

Our calculations suggested that the declining labour force participation ratio, when juxtaposed with the population, shows that almost no employment opportunities were generated in India in the five years to FY10. Breaking up this data shows that while men found more employment opportunities, women lost outespecially in rural India. The dropping out of women from the workforce has meant that at an all-India level almost no new jobs emerged.

Across many agricultural activities, the premium that men used to command over women in terms of per-day wage has shrunk significantly. This is seen most prominently in ploughing but is also true for sowing, weeding, transplanting and winnowing. We note that across many agricultural activities, the average wages were sometimes lower than the minimum wages legally specified then; the situation has dramatically changed where average wages now are above the minimum wages specified. Here, it can be seen that economic enforcement has been more powerful than the legal statute, which was patchily implemented.

Even as the mechanisation of agriculture has taken place over the last decade, there is still significant physical labour involved. Labour productivity has not meaningfully increased in many of the occupations noted above. In such a situation, women, whose wages have gone up much more than mens, become less profitable to employ for a farm-owner. We hypothesise that the implementation of minimum wage has meant workers with low productivity have been priced out of the market, reflecting in fewer employment opportunities for women at higher price points.

We note that women form a disproportionately large group in MGNREGA person-days as compared to their proportion in the rural labour force. This leads us to believe that women who are increasingly being priced out of the agricultural labour market are taking shelter in MGNREGA work schemes. Ideally, the focus should be on improving the productivity of the female workforce via skill development: This would enable them to move beyond the minimum-wage band and command employment opportunities based on merits.

The author is an analyst with Kotak Securities