Written by KG Narendranath | New Delhi | Updated: Dec 30 2009, 06:14am hrs
Key central ministries that control the bulk of Plan expendituremostly the spending on developmental schemes and programmeshave surprised the Planning Commission by demanding an unprecedented 50-70% hike in outlays for 2010-11.

This would make the task of the managers of central government finances all the more difficult in a year they need to try hard to reduce the level of Plan funding through borrowings, as part of the effort to improve the state of the fisc.

According to official sources, the rural development ministry, which runs the employment guarantee scheme, sought a 70% rise in the outlay for next year over Rs 74,270 crore this year. Other conventional big-spenders like HRD, urban development, health, railway and transport ministries also pitched for similar increases in outlays.

The Commission, the arbiter between the recipients of Plan funds and the finance ministry, would indeed have a lot of work to do as the ministries demands even surpass the year-on-year increases in Plan expenditure (PE) in the two fiscal-stimulus years of 09-10 (24% during Apr-Oct) and 08-09 (38%), leave alone the preceding two years average of 21%.

In the normal course, a bargaining space of more than ten percentage points is unlikely between the aggregate demand of the ministries and the gross budgetary support (GBS) that the Commission seeks from the North Block, before the latters budget-making exercise. Once the GBS is finalised, the Commission can prioritise the allocations. 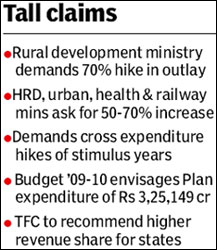 For the finance ministry, a bigger GBS demand is only one part of its worries. The 13 th Finance Commission, which is expected to submit its report to the President in a day or two, would most likely recommend a significant increase in the transfer of the Centres gross revenue receipts to states. Although the Finance Commission would suggest alternative ways to improve public finances, the Centre might still feel the pinch at least next year, as new arrangements like the goods and services tax (GST) would take time to fructify.

This is even as the Centre looked relieved that 2010-11 would give it more fiscal room, thanks to a dip (lower growth) in non-Plan expenditure, on account of the absence of unusual items like the Pay Commission arrears and the debt relief scheme for farmers which it had to account for in 09-10 and 08-09. The increase in salary-related expenditure alone is seen to be of the order of 51% this fiscal.

The Budget presented in last July estimated PE in the current financial year to be Rs 3,25,149 crore, and 40% of this is being met through borrowings, a high level in recent history.

While presenting the first batch of supplementary demands for grants in Parliament earlier this month, finance minister Pranab Mukherjee had reported an 18% y-o-y increase in PE during Apr-Oct, higher than about 15% increase originally estimated. He also took heart from the fact that Plan outlay is at historical high of 5.6% of GDP.

Non-Plan expenditure is 68% of total central government expenditure this year. It mainly comprises interest payments, defence spend and subsidies -- all commitments that leaves little room for monoeuvre. Plan expenditure, in that sense, is an item that can be controlled more easily.

The government said in the FRBM papers presented in Parliament in July that fiscal deficit would be reduced to 5.5% in 2010-11. Fiscal deficit, a key indicator of the government's financial health, is the difference between total expenditure and receipts less borrowings.