Written by Saikat Neogi | Updated: Dec 31 2009, 08:23am hrs
Despite the stock markets hitting lows in March this year because of the global meltdown, the broad market as measured by the movement of BSE Sensex, gained 76% from January 1 to November 29, 2009. Investors who bet big on underdog sectors of last year like metals, auto and IT have reaped huge profits. Its a role reversal for sectors like real estate, fast moving consumer goods and capital goods.

The BSE Metal index outperformed all other indices, with a 216% increase in returns in the last one year as the prices of base metals like aluminum, copper and zinc rose by about 25% in the last two months on the back of rising confidence in economic recovery across the world. Analysts say there would be an expansion in the operating margins of companies in the metal sector because of high sales realisation. Plus, the movement of the dollar and demand growth from China and the US would also have a positive impact on base metal prices.

Even globally, metal stocks are performing better than other sectors. Mining companies led the Morgan Stanley Capital International Asia index with 34% gains this year, based on demand from China. And at the London Metal Exchange, there has been a huge build-up of inventory as investors are restocking in anticipation of prices going upall boding well for metal stocks.

The BSE Auto index reported the second highest returns to investors. From a degrowth in the first three months of the year, auto sales picked up on the back of lower interest rates on auto credit and the governments stimulus packages like reduction of ad valorem Cenvat rate by 4% and 50% depreciation on commercial vehicles purchased between January-March 2009, which was extended to December this year. In fact, in November this year, passenger car sales soared by 60% and sales of commercial vehicles almost doubled, all benefiting from a low base in the same month last year. 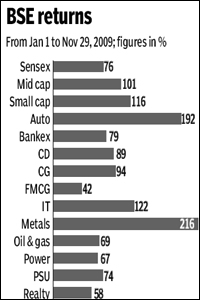 Interestingly, metals and auto were actually the two sectors that were worst affected last year because of the global slowdown and liquidity crisis. Now, they have been the first to recover.

Despite the global slowdown and drastic cuts in the outsourcing budgets of most companies abroad, the BSE IT index outperformed the broad market with 122% returns. With companies reporting pick-ups in IT budgets for next year, investors are once again bullish on this sector as is apparent from the recovery in IT stocks in the last two months.

Surprisingly, the BSE FMCG index reported the lowest returns amongst all indices. Considered to be defensive stocks, the increase in commodity prices and low operating margins reported by most FMCG companiesas consumers down-traded in a slowdown and settled for cheaper brandshad an impact on investors confidence. Moreover, FMCG stocks are highly priced at present with price-to-equity multiples of over 25 and analysts do not expect any major surge in these stocks next year and see the sector giving lower returns in the coming months.

The real estate sector too underperformed the broad market with the BSE Realty index reporting 58% returns in the last one year. Most companies are still in the process of de-leveraging their debt. Both sales and execution of affordable housing are yet to gather momentum. Also, RBIs recent move to curb lending to the real estate sector combined with the fact that most banks are giving construction-linked loans instead of loans based on total down payment (as was the practice earlier) has dampened investors sentiments and is acting as an overhang on stocks. Given that most of the IPO pipeline for next year is made up of real estate companies, it will be keenly observed how the market would absorb these IPOs.