Written by fe Bureaus | Mumbai | Updated: Jan 26 2010, 06:25am hrs
Utility-to-tractor manufacturer, Mahindra & Mahindra (M&M), disappointed the Street on Monday with lower than expected numbers for the December 2009 quarter. The bourses reacted negatively to the companys third quarter performance (Q3FY10), pulling down shares by 5.24% to Rs 1, 072.35 on Monday on the BSE, the largest daily fall in five months. M&M posted a net profit of Rs 413.7 crore for the quarter ended December, 2009 against Rs 43.60 crore in the same period last year, which is 30% lower than estimates of Rs 570 crore put out by analysts. The companys total income for the quarter stood at Rs 4,497.12 crore as against Rs 2,882.08 crore in the same period last year. Meanwhile, the company said it has split its stock which has a face value of Rs 10 each into Rs 5 per share. The shareholders will get two fully paid-up ordinary equity shares for one.

Speaking at a press conference, Pawan Goenka, presidentautomotive sector M&M, said, A lot depends upon what happens in the forthcoming Budget. More than the rising input costs, the possible reversal of the stimulus package is concerning the industry. Goenka said that it will have negative impact on the company as well as industry. Goenka, also the president of Society of Indian Automobile Manufacturers (SIAM), hinted at another price increase if excise duty was increased to 8% in the Budget.The industry has taken a price increase of between 1 to 2% to pass on rising input costs and has been talking of a further rise if the stimulus package is withdrawn. 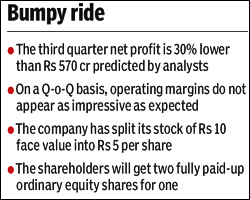 Uday Phadke, president finance, added, The credit policy could see a moderate short-term hike in interest rates. He added that the company expects currency rates to stabilise in the coming quarter and exports tobe better quarter-on- quarter basis. The company has a capex plan of Rs 7,000 crore over four years, including this financial year, and has till date invested Rs 650 crore of it. M&M has a surplus of Rs 2,000 crore on its balance sheet and will look at hitting the market for funds only when required. However, Goenka said that the volumes of the industry will not be significantly affected by the increase in interest rates.

He said, We are not too worried by any rise in interest rates because we can manage it to a certain extent. Commodity prices are on an upswing and it depends on how much we can absorb.