However, the company has expressed concerns over increasing rubber prices, shortage of components like tyres, castings and fuel injections and hardening credit situation in the market. Moreover, it stated that the growth in the coming quarters may not mirror the growth experienced in the June quarter 2010-11 as the low base effect impact diminishes.

M&M chairman Keshub Mahindra said, High interest rates, credit crunch and commodity prices loom over us. The chairman got a thumbs up from shareholders and is being re-appointed as the director and continues as the chairman of the company. Moreover, the company said it is awaiting some additional information on cash-strapped South Korean Ssangyong Motor Company and will be taking a decision on the same at a later date closer to the final bid (August 10). 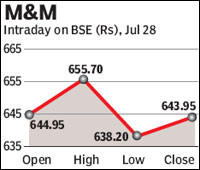