Written by fe Bureau | Mumbai | Updated: Jan 29 2010, 08:18am hrs
Hurt by lower refining margins, state-run Bharat Petroleum Corporation Ltds (BPCL) net profit has more than halved to Rs 379 crore for the December quarter from Rs 799.84 crore in the corresponding quarter of the previous financial year. Revenues for the quarter remained more or less flat, up by about 1% to Rs 32,648.49 crore as against Rs 32,184.63 crore.

Analysts observed that the gross refining margins (GRM) of the companys Mumbai refinery, which is its biggest with a 12 million metric tonne capctiy, worked out to just 0.3 $ per barrel for the quarter while for the Kochi refinery, GRM was $2 per barrel. Analysts were surprised by the weak GRMs, even though the refining industry was hit by the downturn and GRMs in the region have been weak. The benchmark Singapore Complex, for instance, saw a GRM of $1.4 for the quarter.

The gross under-recovery in the third quarter up to December, was Rs 990 crore while for the nine months till December 2009, it stood at Rs 6,038 crore. Under recoveries are shortfalls in revenues due to the low state-set selling prices of auto fuels and cooking gas. BPCL said that it will commence fuel supplies from its Bina refinery in Madhya Pradesh by September 2010. 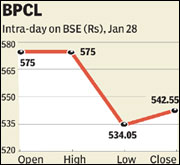