JPMorgan Chase & Co blames its $2 billion, and maybe much larger, trading loss on mistakes made in hedging the market. Bill Black, a finance criminologist, calls this hedginess. Hedginess riffs on truthiness, the word the comedian Stephen Colbert invented in 2005. Truthiness means favouring versions of events that one wishes to be true, and acting as if they were true, while ignoring facts to the contrary that are staring you in the face. Fake hedges are to real hedges as truthiness is to truth. Hence hedginess. JPMorgans trades got around the Volcker rule, which tries to prevent banks from speculating in financial derivatives, by labelling as hedges bets that were clearly not hedges. 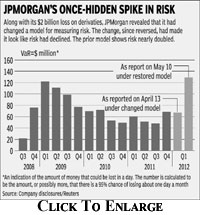 As Black puts it, JPMorgan is now defining as a hedge something that performs in exactly the opposite fashion of a hedge. A hedge is supposed to reduce risk, but according to Black, the losses came from deals that dramatically increased risk by placing a second bet in the same direction, which compounded the risk. Actually, it isnt quite as simple as Black says. While JPMorgan did not respond to my questions on its strategy, Reuters and others have reported that the trade began as a standard hedge. Subsequently, the reports say, it morphed into speculation as the bank layered bet on top of bet. Such doubling down is why Black says JPMorgan indulged in hedginess.

Who is Black to pronounce on such things As a senior regulator at the Federal Savings and Loan Insurance Corp, he, more than anyone else, was responsible for the more than 3,000 felony convictions in the savings-and-loan crisis. Black now talks his walk as a law and economics professor at the University of Missouri-Kansas City.

The S&L crisis of the late 1980s was a mere grenade compared to the weapons of mass wealth destruction that went off on Wall Street four years ago and the others that remain primed and ready to explode. But instead of facing indictments, JPMorgan and others face impunity. Its clear that JPMorgan has absolutely no fear that this might have consequences, Black said. And why should they

As Black is quite right to note, there are exactly zero reasons that Wall Street should fear the consequences of its compulsive gambling, be it with the money of shareholders or the deposits of its clients. Chief Executive Officer Jamie Dimon is scheduled to testify before two congressional panels this week, where I hope he is asked pointed, nuanced questions that break through the veneer of his and the banks public remarks to date.

Too Big To Fail banks like JPMorgan enjoy an implicit federal guarantee in the event a manageable $2 billion loss becomes an unmanageable $20 billion loss. These banks have also delayed implementation of the Volcker rule, which bars some speculative trades, and other provisions of the Dodd-Frank law as they work to make it more loophole than law. Most disturbing is Wall Streets success in blocking any move to restore Glass-Steagall, which required commercial banks to take deposits and make loans, not speculate like JPMorgan did. With Glass-Steagall restored we would not be talking about bailing out banks that speculate.

Headlines blare that the FBI is investigating the JPMorgan trades for evidence of crimes. But down in the fine print the bureau calls this routine. Its show, not substance, our own Captain Renault rounding up the usual suspects in Casablanca. Says Black: There has not been a single investigation by the Justice Department worthy of the word investigation of any of the major entities whose frauds caused the financial crisis.

Criminal investigations now hardly matter, because most of the frauds took place before 2008. Under the five-year statute of limitations for most federal frauds, governments let the crooks run out the clock. They keep their riches, their reputations, their jobs and, absent real reform and real regulation, plunder on. Both the George W Bush and Obama administrations have let the crooks escape. The challenger who wants to replace President Obama would be even worse. Mitt Romney wants to repeal Dodd-Frank. Unless some determined and creative prosecutor finds a way to pursue the wrongdoers, there will be no justice, just more gambling with taxpayers on the hook to pay off the markers. Only Eric Schneiderman, the New York state attorney general, offers any hope, but his staff is tiny and the crimes are mighty. Keep in mind that in 2004 the FBI and the Mortgage Bankers Association in 2004 said there were only two kinds of mortgage fraud, both of them perpetrated by unqualified borrowers who could not repay their loans. The FBI said nothing about banks profiting off huge fees for issuing fraudulent liar loans, nor about why banks lacked standards and practices to turn away unqualified borrowers. Ill call that investigativeness.

The Too Big To Fail banks triple play of lobbying, campaign donations and lucrative jobs for family and friends of Washington officials, elected and appointed, blocks real regulation. Budget cuts and rules in fine print have declawed the SEC and the Comptroller while filing the IRSs audit teeth down to nubs. Washington regulators are looking for problems in all the wrong places, when they are looking at all. Thats regulationiness. The JPMorgan derivatives debacle reveals how the appearance of banking regulation and reform, rather than actual regulation and reform, threatens the financial health of the entire nation. Thats what comes of hedginess.