Investments from tax havens to come under Centre lens

Written by Rajat Guha | Rajat Guha | New Delhi | Updated: Jan 26 2010, 05:23am hrs
The Centre is set to scrutinise foreign direct investment from countries that are yet to offer complete traceability of the source of investments. According to a proposal mooted by the department of industrial policy and promotion (DIPP), a core group, comprising officials from DIPP, the finance ministry and the ministry of external affairs, will be formed to track such rouge investments.

To start with, subsidiaries of Indian companies in tax havens will be required to have business operations in those countries, in order to be eligible to invest in India as the government initiates steps to check re-routing of local capital, a government official said. The government is also planning to scrutinise books of overseas subsidiaries that have been set up with a very low capital base as they are mostly used for roundtripping, or reinvestment of capital as foreign investment, said an official in the commerce ministry.

Tax havens like Mauritius and Cyprus encourage non-residents to park their money there with zero, or close-to-zero tax rates.

The Reserve Bank of India (RBI), DIPP and the Foreign Investment Promotion Board (FIPB) are in talks to set regulations on overseas investments more stringent, the official said. However, bona fide investments from genuine companies that take advantage of tax treaties will not be disturbed, the official added. Mauritius accounts for 43% of the total FDI in India.

Mauritian Prime Minister Rama Sithanen says the island nation can't be treated as a tax haven. There are concerns and we are addressing them. Mauritius is not a tax haven, the minister said. He also added that Mauritius is an international financial centre recognised by the OECD. 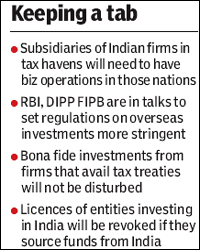 In its bid to allay fears of round tripping of funds, the Mauritian government has warned that licences of entities investing in India will be revoked if they source funds from India, said Milan JN Meetrabhan, chief executive of the Financial Services Commission of Mauritius. An annual audit of Mauritius-based entities investing in India has been made mandatory, he added. During the first seven months of the current financial year, nearly $8 billion of the total $18 billion FDI flowing into India, came from Mauritius.