Written by Ronojoy Banerjee | Ronojoy Banerjee | New Delhi | Updated: Jul 12 2010, 08:34am hrs
The Competition Commission of India (CCI) is expected to give an interim order on Tuesday in the two-year old Jet Airways-Kingfisher Airlines code sharing deal that triggered a probe into whether the deal stifled competition in the airline industry to the disadvantage of consumers.

The agreement led to the companies virtually controlling about three-fifth of the air travel market. Companies usually defend such agreements saying they enhance efficiency and lower costs. The competition regulator is expected to give the ad-interim order in a meeting where both the airlines would be represented.

As per the code-sharing agreement signed in October 2008 between Vijay Mallya-led Kingfisher Airlines and Naresh Goyals Jet Airways, the two airlines decided to jointly manage fuel, cross-crew use, ground handling and route rationalisation in the backdrop of rising fuel costs and mounting losses. Route rationalisation could directly impact competition in the routes, where the airlines that are party to such a deal, have significant presence. In July 2009, following a complaint, the commission ordered an investigation into the matter.

An email sent to Kingfisher did not elicit a response. A text message sent to Jet Airways also went unanswered. Till the time the final verdict is not passed, the Commission can resort to imposing an ad-interim order to crush any anti-competitive agreement entered into by the two airlines, a CCI official said. Section 33 of the Competition Act, 2002 empowers the CCI to pass an order to protect consumers getting affected due to the long pendency of the litigation. 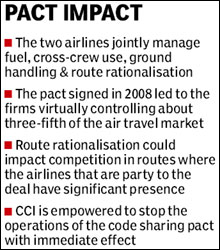 What makes Tuesdays meeting important is the high stakes involved. A competition law expert explained, If the commission passes the interim-order then it could have broad ramifications on the aviation industry because the two airlines hold a majority market share. The expert added that due to the long pendency of such cases, the parties involved may get away easily. An ad-interim order will prevent that,he said.

The commission had first met on June 15, 2010 to explore the feasibility of passing the interim order. However, it was later postponed by a month to give the complainant last opportunity for filing the comments on the case. Following CCIs probe into the matter, Kingfisher Airlines moved the Bombay High Court last year. After the court rejected the companys plea to impose a stay order on the proceedings, the company approached the Supreme Court where the case currently rests. This has been seen by the Commission as a delaying tactic by the airline company.

Former CCI chairman Vinod Dhall said the power to impose the interim order is very important for the Commission which can make CCI very powerful. He identified three parameters on which the commission can impose such an order. The three conditions for an ad-interim order are; whether there is prima-facie case for such an order which would take into account the detailed merits of the case. Secondly, whether the delay in issuing the final order is causing irreparable harm to someone (read consumers) and it will also depend on the balance of convenience, he said. He added although these conditions were not explicitly written in the Competition Act, the regulator would take them into account.

MM Sharma, head competition law practice at Vaish Associates, a corporate law firm said, It is possible for CCI to pass an interim order only in case an enquiry has been initiated in the matter. Since in this case, the matter has already been referred to the director general of investigation, CCI is empowered to stop the operations of the code sharing agreement with immediate effect. Sharma said CCI would have to determine the same after an exhaustive enquiry. Though ad-interim orders are imposed in the rarest of rare of cases, in its short tenure as the competition regulator, the CCI has already imposed such an order recently to allow screening of the Bollywood movie Raavana in Karnataka.