India continues to slip on the logistics front

Written by fe Bureaus | Updated: Jan 27 2010, 06:48am hrs
Trade procedures, transport and telecommunications infrastructure, and the domestic market for support services, constitute the logistic environment in a country and play a crucial role in trade facilitation.

How does Indias logistic environment fare in comparison with the rest of the world A logistic performance index (LPI) worked out by the World Bank, and released last week, shows that India was ranked 47 among 155 nations, and Indias performance was around two-third the levels achieved by Germany, the best performing nation. But what is more worrying is that Indias ranking has also slipped nine rungs from the 39th position in 2007.

Apart from the low ranking, India was also handicapped by the fact that it fared relatively worse than most of the major Asian economies including Singapore (2nd), Japan (7th), Hong Kong (13th), Taiwan (20th), Korea (23rd), China (27th), Malaysia (29th), Thailand (35th), and Philippines (44th). Among other Bric countries, South Africa and Brazil had a better ranking than India, being ranked at the 28th and 41st position respectively. It was only Russia which fared worse than India with its ranking down at 94th position.

The LPI, compiled from more than 5,000 individual country assessments made by around 1,000 international freight forwarders, enables a comparison of the trade logistics profiles of 155 nations. It also provides a snapshot of selected performance indicators in nearly 130 nations, including expanded information on the time, cost, and reliability of import and export supply chains, infrastructure quality, performance of core services, and the friendliness of trade clearance procedures.

But what is surprising is that despite Indias poor ranking it still scored considerably as an over performer, as its LPI score is considerably much higher than its income level, along with countries like Bangladesh, China, Congo, Madagascar, Philippines, South Africa, Thailand, Uganda and Vietnam. India was also placed 4th in the top 10 logistic performers in lower middle income countries, after China, Thailand and Philippines. 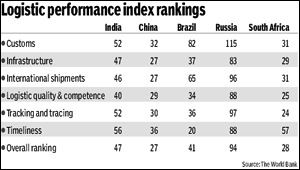 What is more striking in Indias case is that all the 6 components of the LPI fared almost equally bad, with the rankings differing from a high of 40 in the case of logistics quality and competence to a low of 56 in the case of timeliness. Ranked in between were other indicators like global shipments (46th), which measures levels of connectivity, infrastructure (47th), tracking and tracing (52nd), and customs (52nd). Surprisingly, the gap between India and China in the rankings seems to be rather uniform across all the six indicators.

Given the low rankings in the logistic performance index, it is not surprising that only 73% of the Indian users thought the shipments met the quality criteria, which is much below Bangladesh, where 97% were happy about the shipment quality. Similarly, Indian logistic operations were also hindered by the large number of agencies operating. While the number of agencies for interaction averaged 3.71 for importers it was 3.43 for exporters. In contrast, in Hong Kong importers only had to face 1.88 agencies on the average while the importers made do with 1.75.