Written by Sunil Jain | Updated: Apr 3 2012, 15:29pm hrs
It tells you something about the business that only PSU banks give education loans

India isnt anywhere near the US where, at $1 trillion, student loans are the single-biggest source of bank debt and even exceed credit card loans, but is well on its way there, a recent presentation by KP Krishnan and P Suresh of the PMEAC showsthe views, however, are of the authors and not the PMEAC. Student loans in India are about 1.2% of all outstanding bank loans (automobile loans are 2.2% of all loans and housing loans around 9.4%), but theyre the fastest growing segment of loans, albeit on a much smaller base. 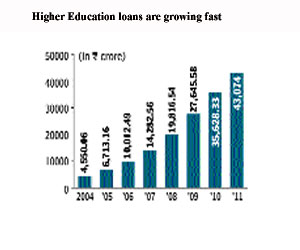 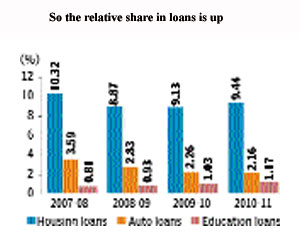 Though the slowing growth of education loans suggests they may now be slowing with the base effect kicking in, that may not last for too long. For one, with just 16.7 million Indians enrolled in college, and the target being to raise this to 30 million by 2020, a base growth is assured. Add to this the fact that even the National Skills Development Corporation (NSDC) model is based on a loan component, and it seems clear the business is certain to grow. While it is true NSDC-type vocational education costs a pittance, ranging from anywhere around R5,000 to R25,000 for a 3-month programme, this adds up to around 4-5 months salary for those going in for such coursesa new retail job at a Pantaloon, for instance, would fetch around R4,000-5,000. In other words, had it not been for the loan schemetill NSDC came around, few bank loans were available for vocational educationchances are the NSDC experiment would have come a cropper long ago. So, given the pressure for education, it is almost certain public sector banksinterestingly, few, if any, private sector banks give education loans!will be under more pressure to give out loans, perhaps to different caste and religious groups (in an otherwise nice lecture on the press in India a few days ago, Prof Robin Jeffrey of Australia recommended India look at keeping tabs on diversity in the news room!).

Which is why the budgets proposal to have a credit guarantee fund is a great ideaindeed, the NSDC loan scheme works on a similar principle. Right now, there is no tripartite agreement (actually, what you need is a tripartite-plus agreement, more on this later) between all the playersthe banks, the students and the educational institutionswhich ensures all have some skin in the game as it were. The biggest beneficiary of educational loans, apart from the kids themselves, are clearly the education providers, the MBA/engineering colleges, but the bank loans dont have them as co-guarantors.

Ideally, if these colleges were bearing some part of the risk of the loan going bad, they too would spend some effort in evaluating the students capacity to benefit from the loan, so as to be able to repay it eventually. Banks would not lend money to any kid if the college didnt certify that the kid was bankable as it were. The bank should ideally have a lien on the certificate the kid gets based on the loan given and, once she gets a job based on this, the tripartite agreement needs to be re-assigned, with the employer taking on the colleges place as guarantor.

This is where the UIDAI and education minister Kapil Sibals dematerialisation of college degrees comes in. Under the plan, college degrees will no longer be handed out in physical form (just as share certificates are no longer in physical form) and can be seen/tracked online. So when student A gets a degree from college B which has been financed by bank C, employer D will see that the bank has a lien on the degree. When employer D hires A, he will have to enter an agreement in which he takes over college Bs obligations, and will deduct a certain amount and pay to bank C. If all this sounds draconian, and unworkable, keep in mind that when you buy a car with a loan, the registration certificate (RC) has a lien and you cant sell the car until you repay the bank loan, get a letter from the bank to this effect and then get your RC modified accordingly.

If student loans arent to become the next burgeoning source of NPAs, in which case banks will slowly stop disbursing them, this is the only way to go.