The Indian govt is far more active than the courts in requesting the removal of online content. This sensitivity to criticism needs to be addressed

The information revolution, which the internet has enabled, has made life more complicated for law-makers. Issues of copyright infringement, impersonation, defamation, sedition and freedom of speech and expression have all come under the scanner with renewed vigour as people find new and innovative ways to use the internet to express themselves, share content (legally and illegally), bully others and attract advertisers interest in their websites. Googles Transparency Report 2012, coming from arguably the most diversified internet company, is thus an interesting compilation of all the requests for removal of content and for user information by countries and courts worldwide. An analysis of the report provides an insight into what different countries feel is worth removing from the internet, which agencies are the most active in such requests (government agencies vs courts), etc. 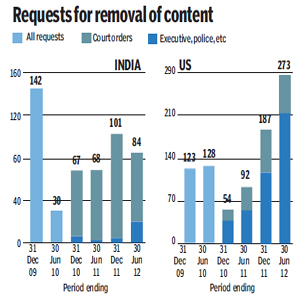 The salient point that emerges from the report is that, worldwide, the number of requests to remove content from Google has increased to 1,791 in the first half of 2012 from 949 the same period the previous year. In keeping with this trend, the number of requests for user data has increased to 20,938 in the first half of 2012 from 15,744 a year earlier. Now, it would be easy to instantly condemn governments and courts for this, arguing that they are increasingly playing Big Brother. But further examination of the report lays bare the fact that reality is far more nuanced. The report itself is divided between requests for removal of content and requests for user data. It is fitting that its analysis is similarly divided.

In the case of requests for removal of content, the US leads the pack with 552 total requests for removal between July 2011 to July 2012. India, in comparison, has 253 requests. However, it is interesting to note the institutions sending these requests. In the US, 31% of all the requests came from government agencies, while the rest were all through court orders. In India, only 11% of all requests for removal came from courts. This is indeed revealing. Given the distinction made between government agencies and courts, it can be assumed that the courts represent companies and individuals. Thus, in the US, it is individuals and companies who are far more active in seeking the removal of content. And the breakup of reasons is in line with this. While defamation was the most cited reason, privacy and security was the second highest, with trademark and copyright coming in third and fourth, respectively.

In India, on the other hand, the government is overwhelmingly the prime mover in seeking the removal of content. And the breakup of reasons is as follows: Defamation, followed by impersonation, with privacy and security coming in third. This is in keeping with recent incidences like cartoonist Aseem Trivedi being accused of sedition and his cartoons being removed from the internet, and the PMO requesting Twitter to remove several (often humourous) accounts impersonating the PM. Now, these facts could imply several things. First, they could imply that people in India are far more active in expressing their disapproval of the government on the internet than their American counterparts (frankly, this is unlikely). The other implication is that the Indian government is far more sensitive to online criticism than the US government (doesnt sound outlandish, does it). So, the question then is, why is our government so sensitive This could be because (a) it takes itself too seriously, and feels any sense of humour is beneath it or (b) it doesnt take itself seriously enough, and feels any fun poked at it can actually harm it. Either way, the Indian government needs a serious image makeover. It is also revealing that Googles compliance rate for content removal requests from India has fallen from 77% at the end of 2009 to just 33% at the end of June 2012. Compliance with user data requests has similarly fallen from 79% at the end of 2010 to 64% at the end of June 2012.

In the case of requests for information, things get murkier. India ranks second in the total number of such requests being made with 2,319 requests in the first half of 2012 while the US leads with 7, 969 requests. The US data comes with a caveatGovernment requests for user data from the US include those issued by US authorities on behalf of other governments pursuant to mutual legal assistance treaties and other diplomatic mechanismsso theres no clarity on how many requests the US has made on its own. In Indias case, however, the entire 2,319 requests are from India itself. But, the Google report commits a serious flaw in omitting the reasons for these requests. Fine, giving benefit of the doubt to the governments of the world, most of the reasons must have something to do with national security and containing terrorism. But still, its not unheard of for governments to try to find out more about those who are simply critical of it, which is scary. If the report had given a breakup of reasons, it would have provided greater transparency in this areaarguably the section with more ominous repercussions.