GM India to launch sedan with tech from China JV

Written by Ronojoy Banerjee | Ronojoy Banerjee | New Delhi | Updated: Aug 16 2010, 06:22am hrs
General Motors (GM) is planning to bring a low-cost sedan to India, which is currently taking shape in China at SAIC-GM, GMs 50:50 joint venture with Shanghai Automotive Industry Corp (SAIC).According to sources, the car, codenamed SG-308, will be priced between Rs 6.5 lakh and Rs 7 lakh. It is expected to hit Indian roads in the first half of 2012. The development is significant since this would be the first made-in-India car powered by Chinese technology.

SAIC has very advanced technology which GM will utilise. The sedan will be the first passenger car from the SAIC-GM portfolio, the source said. The car would be developed in India and the technology would be sourced from China.

The source cited two factors behind the GM-SAIC move to tap the sedan market. Firstly, the low-cost sedan segment in India is still largely untapped. Secondly, GM is clear that it does not want cannibalisation of its small cars, which is why it has steered clear of launching a hatchback for Indian roads, he said. 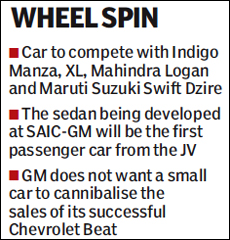 In the US, GM is witnessing people opting for smaller cars; however, in India, the trend is the opposite. There is a substantial number of people who go for sedans due to aspirational reasons, the source added. He said that the company would have to invest heavily in branding the car because Indians would be wary of Chinese technology.

When contacted, a GM spokesperson said: We are working on several product programmes from our stable and also with our partners including LCVs but nothing has been finalised yet. Even otherwise, for competitive reasons, we may not be able disclose product details at this juncture. Having said this, we will announce the details closer to the launch of the products from time to time.

S Ramnath, auto analyst with Mumbai-based SSKI Securities said: GM India has Chevrolet Optra (Rs 9-12 lakh) and Cruze (Rs 12.15-16 lakh) but they want to tap the Aveo segment which has done well. He added that having seen an overwhelming response for Chevrolet Beat, the company would not want to launch another hatchback which would eat into its sales. According to Kapil Arora, auto analyst with Ernst & Young, companies want to be present in every price point and offer the best to their customers at a reasonable a price.

In December 2009, SAIC and GM announced a JV to sell passenger cars and light trucks for the Indian roads. In May this year, president and MD GM India Karl Slym had said that the company would launch LCVs in India by beginning 2012 following which it would bring in passenger cars. The LCVs would be rolled out from its plant at Halol in Gujarat while passenger cars would be developed at Talegaon.