Siemens India seems to be facing a series of challenges, as the ordering environment becomes challenging (H1FY12 order inflow down 36% year-on-year), margin pressures intensify (margins at Lehman crisis level) and balance sheet concerns rise (sticky receivables at a decade-high level). Moreover, Asian competition in the T&D (transmission and distribution) space is also showing signs of resurfacing. The FY13e (estimates) P/E (price to earnings ratio) of 28x seems to be overlooking these challenges. We downgrade the stock to Sell (target price R635), and recommend a switch to Cummins India, which seems to be well poised to benefit from Indias rising power shortages. 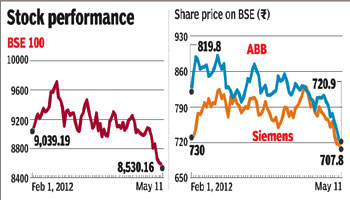 Margin pressure also becoming more intense: With rising commodity prices and intense competition over the last four to six quarters, margins seem to be under pressure. In the latest investor communiqu, management noted that both higher costs and pricing pressure led to the decline in margins. We also note that the last time the RM (raw material) ratio was at a same level, Ebitda (earnings before interest, taxes, depreciation, and amortisation) margins were better, which implies that the fixed cost of the company seems to have risen faster over the past two to three years. 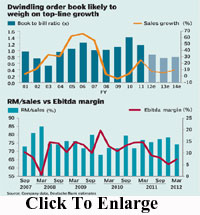 Meanwhile, balance sheet concerns remain: While the receivable days over the last two years have remained largely stable, and may continue at a similar level, they are higher than the average of 116 days seen over the last cycle. However, the key concern is that the proportion of receivables that are more than six months-old within the overall receivables seems to be rising; at 61% of total receivables. Hence, the balance sheet risks could compound the challenges for the company.

However, the $140bn capex outlined by the Railways could offer a huge upside trigger: The ministry of Railways has outlined a large $140bn (R7trn) investment programme for the 12th Plan. This, as per the recent recommendations of the expert committee on Railways, is likely to be focused across 15 different areas. In terms of monetary outlay, the Dedicated Freight Corridor, followed by rolling stock additions, safety and tracks and bridges development, to be the focus areas.

Siemens India could be one of the largest beneficiaries of the proposed railways capex (capital expenditure) in India. To recap, Siemens has a strong presence in the railways segment, which is covered by the Infrastructure and Cities vertical of the company. It offers products and solutions across the spectrum.

The stock looks expensive, even relative to peers: Relative to both its global and Indian peers within the capital goods space, Siemens India seems to be one of the most expensive stocks on both a P/E and EV/Ebitda basis, despite having weaker fundamentals, such as lower margins and ROEs (return on equity). While MNC stocks do tend to trade at a premium in India, the extent of the premium looks unreasonable.

We value Siemens India at INR 635/share on the basis of forward P/E on core earnings due to the significant net cash on the balance sheet.