Exporting poverty for SCs and STs

These are the findings of a study done by Megha Mukim and Arvind Panagariya for the Columbia-NCAER conference on trade, poverty, inequality and democracy in the capital on Thursday and Friday. Another paper, by J Cain, Rana Hasan and Devashish Mitra presents similar results.

For STs, the figures are similar, with poverty falling from 64.4 in 1983 to 46.3 in 2004-05. What needs to be noted here is that the figures for both communities continued to fall steadily in the post-liberalisation phase. Indeed, for SCs the rate of poverty reduction accelerated in the period 1993 to 2004-05.

As the OBCs are identified only in 2004-05, an analysis of the effect of rising incomes and increased openness on OBC poverty is not yet possible.

For a more in-depth look, the researchers looked at the top ten states by SC population, and tabulated the SC poverty rate in them from 1983 to 2004-05. They found that poverty declined in each of the ten states by at least 10 percentage points. They also found that, in these states, there was a marked fall in poverty in the period between 1993-94 and 2004-05, the post-liberalisation, high-growth phase. 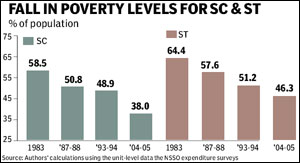 Drawing on the Cain-Hasan-Mitra paper and others, Panagariya ranked states based on their openness to trade and to the absence of trade barriers. While all trade issues are controlled by the central government, the states are ranked/scored on the size of the export-oriented industry in overall GSDP. So if Gujarat has a higher export-oriented industry share than Bihar, it will score more when the central government reduces either import tariffs or import duties.

Based on this, Mukim and Panagariya conclude that states which are more open have fared better when it comes to poverty reduction. Cain-Hasan-Mitra also study the impact of labour laws, along the lines done by earlier studies such as the one by Besley-Burgess, and find that states with more flexible labour laws tend to have higher reduction in poverty levels.

A paper by Pravin Krishna and Guru Sethupathy found that overall inequality varied modestly over the period, falling between 1988 and 1994, rising between 1994 and 2000, but falling again by 2005.