Written by fe Bureau | Mumbai | Updated: Jan 29 2010, 08:14am hrs
Tata Tea on Thursday said its consolidated total income for the quarter ending December 31, 2009, had grown 21% to Rs 1,549 crore from Rs 1,283 crore in the corresponding quarter of the previous year. The profit before interest and exceptional items increased 12% to Rs 175 crore from Rs 156 crore for the same period last year due to improved operating performance. The profit after tax has fallen to Rs 99.89 crore from Rs 493.53 crore due to an exceptional item of Rs 581 crore reported in the December 2008 quarter. According to a company press release, the growth in the companys consolidated total income was driven by strong brand performance aided by improved price realisation in key markets which offset substantial increase in commodity costs. The companys advertising expenses were up at Rs 280 crore compared with Rs 231 crore in the December 2008 quarter.

The operating income includes the performance of a Russian beverage company in which a 51% stake was acquired through a subsidiary during the quarter ended September 30, 2009. During the September-December 2009 quarter, increased investments in advertising and promotions drove brand performance and new initiatives.

The standalone income from operations for the quarter grew 18% to Rs 451 crore from Rs 383 crore for the same period last year. This growth was driven by strong brand performance. Profit from operations before other income, interest and exceptional items at Rs 44 crore is marginally higher than the corresponding quarter of the previous year. With a value share of 22.6% in November, Tata Tea is now the market leader in the Rs 7,000-crore branded teas market, having overtaken peer Hindustan Unilever (HUL) which has a value share of 21.3% (source:AC Nielsen). The companys best-selling brand is Agni which caters to the mass segment and other brands include Tata Tea Gold, Chakra, Gemini and Kanan Devan. 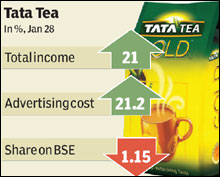