Written by Ronojoy Banerjee | Ronojoy Banerjee | Anandita Singh Mankotia | New Delhi | Updated: Jun 18 2010, 15:12pm hrs
Audit firms may be asked to financially compensate investors for losses resulting from their lapses, with the government planning to strengthen the mechanism for fixing responsibility for corporate frauds and protecting investors from their ill-effects. To make this feasible, an audit firm would be held accountable for its actions regardless of whether the firm itself or its affiliate was the official auditor, corporate affairs minister Salman Khurshid told FE in an exclusive interview.

The government is yet to work out the proportion of investors' losses the auditor will have to compensate. The options include capping the quantum of compensation and evolving a criterion for fixing amounts on a case-by-case basis.

The minister said the government is keen on a legal framework so that victims of accounting malpractices could be duly compensated in the event of a scam. We are looking at how a person/investor who suffers due to audit firms going wrong can be compensated. We need to find a solution to fix the problem for the future. We may not have had a solution in the past, but we need one for the future, he said.

Khurshid said that in order to achieve the same, the practice of certain audit firms setting up affiliates across the country needs to be fixed first. He said that firms with different offices function under one brand name but opt to skirt responsibility for the actions of one another. Currently, one audit firm in Hyderabad is not liable for anything that its Bangalore affiliate does. This needs to change, he said. 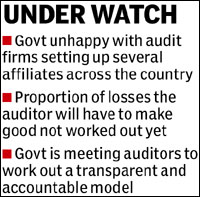 Khurshid said the government was meeting audit firms to work out how a system of greater transparency and accountability could be evolved. In fact, senior officials of PicewaterhouseCoopers met Khurshid earlier this week to explain the nature of their network in the country. Corporate affairs secretary R Bandyopadhyay also attended the meeting.

Amarjit Chopra, president of the Institute of Chartered Accountants of India (ICAI) observed that though the idea to have such a mechanism is good, there was a serious question mark over its feasibility. In case a big accounting scandal like Satyam breaks out, it would be literally impossible for the accounting firm to compensate, he said. Chopra suggested that either the government cap a certain percentage of the money that the audit firm should pay or disqualify audit firms who have been involved in recurring defaults. He agreed that bringing all affiliates under one umbrella would create accountability.

Following the Rs 8,000-crore Satyam scam which also involved two leading auditors of PwC Hyderabad, S Gopalakrishnan and Srinivas Talluri ICAI had appointed a high-powered committee to look into the accounting aspects of the scandal. In its report, the committee had outlined grave accounting errors committed by PwC and questioned the nature of foreign audit firms' work in India.