Written by Yogima Seth | New Delhi | Updated: Jan 8 2010, 08:33am hrs
Unlike the last nine auto expos, this time the differently-abled people can look up to the motoring extravaganza as the country's electric two-wheeler manufacturers have for the first time launched products to cater to the needs of this segment.

At the ongoing 10th Auto Expo, Hero Electric has launched the Optima Plus, which is touted as the first e-bike aimed at physically challenged people, while its closest rival BSA Motors have launched India's first electric scooter designed especially for the differently-abled, the Roamer Able.

With Roamer Able, BSA Motors has introduced an in-built reverse mechanism which enables the rider to reverse the vehicle with the ease of a switch. The scooter, which will be launched in the Indian market by the end of the month, would be priced at Rs 35,300 (ex-showroom Delhi). On the other hand Optima Plus, which has special features like side-wheel shockers and special side-wheel lights, is priced at Rs 32,796. "We aim to reach to the target group of the disabled with the launch of Roamer Able and thereby bring them into the mainstream. The scooter comes with innovative features such as a holder for crutches and a rear-brake lock to park the scooter on slopes along with a vehicle reverse switch to ensure safe and comfort ride for the differently-abled," KB Srinivasan, vice-president, BSA Motors said.

Meanwhile, the companies are expecting the withdrawal of countervailing duty on import of components in the upcoming budget, which in turn will make the products more competitive and give a major boost to the demand. "Currently, critical parts attract a CVD of 10.5% as against no duty on import of complete products and this has made the domestic industry uncompetitive vis-a vis its counterparts in other parts of the world. We expect that the government will completely scrap away with the CVD in the budget," Naveen Munjal, managing director of Hero Electric told FE.

According to Munjal, who is also the president of Society of Manufacturers of Electric Vehicles, there is also a need to reduce VAT and introduce the Delhi subsidy models across states to eventually increase sales. 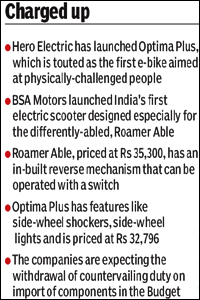 "We are in talks with various state governments to reduce VAT as well as offer subsidies so that more and more people move on to electric scooters," he said, adding that the states like Orissa, Uttarakhand, West Bengal, Kerala, Andhra Pradesh, Karnataka, MP and Chattisgarh have already reduced VAT from 12% to 4% now.