Written by The Economist | Updated: Jun 30 2010, 09:36am hrs
More than the European debt crisis is keeping American economic policymakers awake at night just now. Despite a year of government effort, a tentative recovery in the housing market appears to be on the verge of stalling.

Home prices have now fallen for the past six months, according to the Case-Shiller home-price index, after rising from their nadir for the five months before that. (Another index, from the Federal Housing Finance Agency, has, however, shown a slight uptick in March and April.) As for sales volumes, last September home sales soared in anticipation of the planned expiry of a government housing-tax credit, only to tumble thereafter, despite the extension of the deadline to April this year. As the new deadline approached sales duly climbed again. But the latest data show that even before the credit window closed, fewer sales were going through (see chart). Sales of new homes fell 33% from April to May, nearly the worst performance since the bust began.

It is not as if the government has not tried. After the housing crash, millions of homeownersa full quarter of those with mortgageshad loans larger than the value of their homes. Barack Obama hoped to prevent defaults with a plan designed to encourage banks to refinance the mortgages of those unable to pay. On the demand side, the Federal Reserve held down mortgage rates by buying up mortgage-backed securities, while Congress offered a generous tax credit to qualifying buyers. 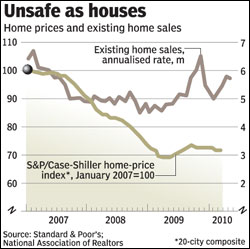 These programmes have not worked as well as had been hoped. Affordability is no longer the driving factor behind foreclosures; borrowers who took on more debt than they could handle defaulted on their loans long ago. Instead, the problem is negative equity. A borrower deeply underwater on his mortgage may have no choice but to default if he loses his job, since a sale would entail a huge loss. And a growing number of underwater borrowers are opting simply to walk away from mortgages that they can in fact afford.

Banks are balking at rewriting mortgages, despite incentives to do so. Too often borrowers default later on. The latest data on the governments programme show that 400,000 loans have been renegotiatedfar less than the goal of 3m-4m. Neither have government incentives to buy houses helped much. Credits may have done little more than move sales around.

The steady drumbeat of foreclosures has continued; they have been running at a rate of over 300,000 filings a month for the past 15 months. By some estimates, it will take more than eight years of normal sales to clear the stock of houses now held by banks. This overhang holds down prices, meaning that the road out of negative equity is a long one. Yet policy failures can be blamed only so much. A new report from Harvard Universitys Joint Centre for Housing Studies notes that, historically, sustained housing recoveries are far more dependent on job growth than on factors like the level of interest rates. So Mays disappointing jobs figures, showing that the private sector added just 41,000 workers, was doubly bad news. With nearly 15m Americans still out of work, a real turnaround could be a long time coming.