DoT may face flak over WiMAX, too

The department of telecommunications could soon find itself mired in yet another controversy, this time over the auction of WiMAX spectrum, scheduled to take place along with 3G in January. At the crux of the problem lies the lack of clarity on whether WiMAX operators can provide only data services or offer voice as well.

Currently, the WiMAX platform supports only data, but technically it can also be used for Voice over Internet Protocol (VoIP). Global equipment providers are already conducting trials for VoIP-enabled handsets and once these become commercially available, WiMAX operators could offer voice services, too.

Some cellular operators are complaining that because of DoTs lack of clarity on the subject, WiMAX could be used as a backdoor entry into 3G services at half the cost. In the forthcoming auctions, the reserve price for pan-India 3G spectrum is Rs 3,500 crore, while for WiMAX it is only Rs 1,750 crore. Operators have in the past objected to the lower reserve price for WiMAX, saying it is against the principle of fair play.

Their immediate concern is that PC-to-PC voice calls can legally be made on WiMAX networks from day one. Moreover, regulator Trai has recommended allowing PC-to-landline or to-mobile calls and DoT is already finalising a policy on the subject. If that is allowed, WiMAX can be used for voice calls even without compatible handsets. 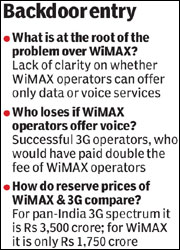 The way the government has left it vague can create problems similar to that in 2002-03. Back then, an operator with a basic service (landline) licence, which was meant to provide limited mobility through CDMA technology, started providing full mobility services, said an analyst referring to what was then Reliance Infocomm.

Indeed, when Reliance Infocomm started providing CDMA mobile services in 2003, GSM players had objected, saying it amounted to backdoor entry into the mobile space at a lower fee.

The matter wound up litigation, with the government subsequently moving from distinct cellular and basic licences to a technology-neutral licence called the unified access service licence. In the case of 3G and WiMAX also, the policy should have been technology neutral, said an industry observer.

Technologically, synergies are also developing between the 3G and WiMAX spectrum bands, which could complicate matters. For instance, 3G spectrum is in the 2.1 GHz band while WiMAX bands are in the neighbouring 2.3 and 2.5 GHz. The International Telecommunications Union, which sets global telecom standards, has already recognised 2.3 GHz as a 3G band. This means an operator can deploy 3G equipment in the 2.3 GHz band.

Theres another catch. Successful bidders will receive 3G spectrumwhich is given in pairsof 10 MHz. However, WiMAX players would get 20 MHz each. In other words, WiMAX operators would have twice the amount of spectrum to potentially offer both data and voice services than 3G operators at half the cost.