Written by Sumita Kale | Updated: Feb 3 2010, 08:57am hrs
Along with inclusive growth, financial inclusion has emerged as one of the overriding concerns driving policymaking, as it is widely recognised that the majority of Indians continue to lack access to the formal financial sector. While RBI has taken up a slew of measures in the last few years, like no-frills accounts, Banking Correspondents and simpler KYC norms, one of the main factors restricting bank expansion, especially in rural India, has been high transaction costs. But, given the rapid advances in digital technology that have reduced costs significantly and the phenomenal and expanding reach of a wireless network, the solution could lie in using the mobile phone as an instrument for financial inclusion.

The successful use of mobile-based transactions in countries like Kenya, the Philippines and South Africa has been one of the factors encouraging RBI to open this sphere in India, albeit cautiously. However, in the year since RBI allowed mobile banking by banks, transaction volumes have been low. In December, the demand from banks to relax the daily limit on mobile transactions was accepted by RBI. From Rs 5,000 on fund transfer and Rs 10,000 on purchase of goods and services, the maximum limit on all transactions in a day is now pegged at Rs 50,000. Also, banks can now offer transactions less than Rs 1,000 without end-to-end encryption. Clearly, RBI is going all out in enabling banks to use the mobile phone to reach out to the public.

Yet, making payments through a mobile phone demands a certain level of user comfort. Trust and security in the transaction environment are also big concerns. Initially, therefore, the users of this service will have to be high-income, net savvy bank customers. For mobile banking or m-commerce to make the next step to financial inclusion, much more will be needed. 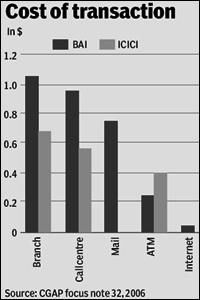 While financial inclusion is largely seen as a problem affecting rural areas, the crux of the problem actually lies in the income characteristics of a household. According to RBI, 72% of those earning less than Rs 50,000 a year lack a bank accountwhen it comes to access to banks, the distinction between rural and urban matters less than the income differential. Without appreciating the particular needs of the poor, it would not be possible to create appropriate policy responses.

The poor form a large and diverse group. Around 40% of Indian households earn less than Rs 75,000 per annum. So, more than 90 million households depend on cash for their transactions. These include marginal farmers, landless labourers, urban slum dwellers, unorganised sector employees and entrepreneurs, migrants and socially excluded groups. Typically, transactions occur in very small amounts. In 2005-06, more than 500 million people spend less than Rs 580 per month on average. Further, income and expenditure flows are irregular, accompanied by high levels of riskuncertain employment, unenforceable contracts, income and expenditure affected adversely by sickness etc. Banks, with their formal systems of assessing creditworthiness, find such groups unattractive.

RBI has valid concerns to take care ofrestricting money laundering, financial terrorism and, above all, ensuring the stability of the payments system. So far, successful bank-led initiatives in South Africa and the Philippines have been the inspiration for policy moves, with the non-bank model in Kenya being considered inapplicable to India as it has the backing of a National ID scheme. It is the neglect of KYC procedures while issuing pre-paid SIM cards in India that explains the wariness of the central bank in relaxing m-payment rules. However, once the UID is in place, this aspect should be taken care of, which explains the open stance of RBI now.

Looking ahead, there is significant activity expected in the m-payments sphere. Non-banks, especially mobile service providers once considered taboo, have been allowed to issue mobile-based prepaid instruments since August. An inter-ministerial group for financial services on mobiles set up in November is on track with formulating guidelines for further progress. In its second meeting last month, the group identified three elements to be decided on in consultation with various agencies like banks, mobile service providers and UID Authority: KYC norms, processes and actual data pertaining to enrolment of new customers, a ubiquitous infrastructure component for cash-in and cash-out operations at the village level and an additional infrastructure component for facilitating management of a large number of small-value accounts and micro-transactions. The intent to cater to the needs of the poor is there. If all agencies and regulators work in tandem, the next few years could see dramatic transformation in the way most Indians make their financial transactions.

The author is chief economist at Indicus Analytics and can be contacted at sumita@indicus.net