Written by fe Bureaus | Mumbai | Updated: Jan 26 2010, 06:31am hrs
Sterlite Industries Ltd, the subsidiary of London-listed Vedanta Resources Plc, which on Monday announced its consolidated third quarter results, witnessed its net profit taking a beating as it incurred a cost of Rs 274 crore in the quarter ended December 31, 2009, after it failed to acquire US copper miner Asarco.

However, strong metal prices and volume offtake saw the companys revenues rise by 50%, over the same period of the previous year to touch at Rs 6,677 crore. Similarly, operaing margins grew to 32% in the December 2009 quarter as against the 25.84% in the previous year.

Overall, the company said consolidated profit after tax grew 42% to Rs 731 crore for the third quarter ended December 31, 2009, against Rs 514 crore in the corresponding quarter last year. The profit after tax of Rs 731 crore during the quarter was after considering an exceptional cost of Rs 274 crore which the company incurred due to termination of Asarco agreement. Sterlites attributable profit before exceptional item stood at Rs 1,005 crore, up 90% against Rs 529 crore in the third quarter of 2008-09. The year long tussle between mining giant Grupo Mexico and Sterlite Industries to buy bankrupt US copper miner Asarco ended in November, 2009 in a major setback for Sterlite, with Texas, federal bankruptcy judge endorsing the reorganisation plan offered by Asarco parent Grupo Mexico over the plan offered by Sterlite Industries. The company has also filed an application before the court for refund of the $50 million drawn down by Asarco and payment of compensation for legal expenses. 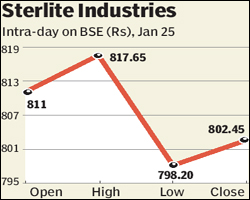