Written by Anandita Singh Mankotia | New Delhi | Updated: Nov 30 2009, 09:27am hrs
The Delhi High Courts judgment striking down as illegal the advancement of cut-off date for licence eligibility in 2007 by the telecom minister A Raja has put Trai in a fix. This is because the stakeholders are likely to raise eyebrows on the Telecom Regulatory Authority of India (Trai) in the three-day consultative process, which begins on Monday.

One of the key issues to be decided through the consultative process is whether telecom licences should be given to more players or not. Analysts maintain that with the High Court ruling declaring the cut-off date as illegal, the way for 16 companies, including the petitioner S Tel and US telecom major AT&T to be given licences. In this backdrop, Trai should either drop the issue from its agenda or first seek a clarification from the court.

Questions are bound to be raised on the legality of the whole exercise since the division bench of the High Court has struck the advancement of the cut-off date as illegal. The government has no choice but to grant licences to the balance applicants of 16 companies. In such circumstances, how can Trai ponder whether the balance applications should be processed or not asked an industry analyst.

The reference of the matter by the Department of Telecommunications (DoT) to the Trai in August was controversial since the latter had earlier given an undertaking to the court that the balance applications have not been rejected but are on waitlist and would be processed subsequently. In fact, the CBI is already enquiring why the DoT went back on its undertaking to the court and sought Trai view. 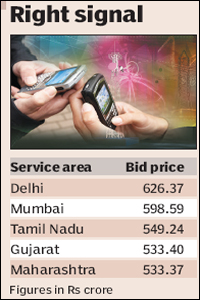 As reported by FE earlier, the Trai had recommended in August 2007 that the government could continue with the policy of having unlimited number of operators per circle. However, seeing a deluge of applications, communications and IT minister A Raja put a temporary cap that only the applications received by October 1, 2007 would be processed. However, on January 10, 2008, through a controversial press note, the DoT advanced the cut-off date to September 25, 2007.

This benefited eight companies that were awarded licences in January 2008. Of them, Unitech Wireless and Swan Telecom have since sold stakes to foreign telecom majors at huge valuations. The arbitrary advancement left the applications of 16 companies, including that of AT&T of US in limbo. One of the aggrieved companies, S Tel had moved court challenging the DoTs move. The Delhi High Courts single bench had struck the DoTs move illegal in July last year. However, the DoT had appealed to the division bench of the court, which dismissed its plea on November 24.