Decoupling of US and Euro economies

The eurozone and US business cycles seem to have decoupled, but is Germany on the US or eurozone side of the divide

If correct, this suggests the German stock marketwhich seems to predict Germanys convergence to the US pathis due for a correction

One of the most interesting features of recent business-cycle history is the decoupling of US real economic activity from that of the eurozone (CEPR 2012, ECB 2013). CEPR's Euro Area Business Cycle Dating Committee estimates that the eurozone entered a new recession in the third quarter of 2011, something the US has so far avoided. The decoupling is at odds with historical regularities which show a high level of synchronisation between business cycles in the US and the eurozone. 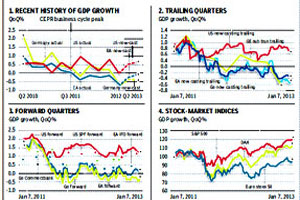 But the overall decoupling raises two questions: How convincing is the US recovery, and does Germany share the fate of the eurozone economy as a whole

On these questions experts are divided and press commentary is often contradictory, being driven by the volatile dynamics of quarterly GDP figures. Figure 1 shows quarterly GDP growth for the US, the eurozone and Germany since the beginning of 2010, as well as the predictions of Now-Casting Economics up to the second quarter of 2013. The key points are:

n US GDP growth is clearly volatile but appears to oscillate around a positive rate of 2% (annualised) throughout the period;

* German growth, by contrast, appears to be on a negative trend, following that of the eurozone aggregate.

This trend has been difficult to identify in real time as it has been masked by temporary jumps in some quarters. The picture also suggests that the weak out-turn for the fourth quarter of 2012 was a temporary phenomenon in the US. But it confirmed the negative trend in Germany.

The flow of data publications over this period contains information which we can use to gauge the direction of the underlying economy. We use a nowcasting model to interpret this flow of data, and to translate it into a forecast (or nowcast) of current-quarter GDP growth. The nowcasting model reads and processes all relevant information as it becomes available, including surveys, employment statistics, and production indexes. Each successive piece of economic news allows the model to improve the accuracy of this nowcast. However, this process produces a series of fixed event forecastsof growth in each calendar quarter. To get to a continuous assessment of the changing rate and direction of growth in the economy we can use the nowcast for a rolling quarter, which is just a moving average of expected growth in two successive quarters. The rolling quarter can be either trailingi.e., for the 90-day period which ended yesterdayor forward i.e., for the 90-day period which started yesterday. These moving averages are also smoother than the quarterly profile shown in Figure 1 and therefore better suited to identify underlying tendencies in the data.

The data point to a decoupling between the US and the eurozone since the spring of 2011. This helps to interpret the more familiar and more volatile series shown in Figure 1 by identifying more clearly the date of the decoupling. Nowcasting picks up the signal immediately and the Survey of Professional Forecasters, whose forecasts are published much less frequently, confirms it much later.

For the US, the signal is less clear at the end of the sample, but Now-Casting Economics points to more persistent positive performance than the Survey of Professional Forecasters, reading the fourth-quarter out-turn as a temporary slowdown. This is in contradiction with positive signals coming from other data series and in particular from the labour market.

Although the out-turn for Germany in 2012 has been more positive than that predicted by nowcasting, the tendency towards a slowdown is confirmed by the recent data. Trailing-quarter nowcast series are relatively accurate and allow us to get a better picture of the movement in the underlying economy than the GDP series on its own. However, in order to get a better view of the immediate future direction of growth, it is helpful also to look at rolling forward-quarter nowcast series. Forward quarters are slightly less accurate than trailing quarters, but still give a consistently informative view of the trend in the economy and, when compared with the trailing series, give a clear indication of acceleration or deceleration.

Figure 3 shows the forward quarter nowcast series for the US and eurozone, which confirms the positive view of US growth, clearly down-weighting the significance of the 2012 fourth-quarter slowdown (in agreement with the Survey of Professional Forecasters). Figure 3 also confirms the negative view for the eurozone, albeit with a slightly more pessimistic view than that of IFO/INSEE/ISTAT.

For Germany the forward-nowcast series reinforces the negative view conveyed by the trailing-nowcast series, suggesting that the slowdown in the German economy in the fourth quarter of 2012 is not just temporary. In this case, nowcasting takes a quite different

view from most independent forecasters (represented here by Commerzbank). That was also the case in the spring of 2011 and the evidence suggests that we turned out to be right.

If we compare the trailing-quarter nowcast series with stock-market indices for the same period, it appears that the nowcast series reflect well the stock markets view of the divergence between the US and eurozone economies (see Figure 4). Note however that the stock market appears to have a different view of Germany. It has decoupled from the rest of the eurozone, and is converging on the path of the US.

If the nowcasting view is accurate, then the German stock market is surely due for a correction.

More importantly, the decoupling between the strongest country of the eurozone and the US suggests that the eurozone crisis, and the policies which have been adopted to address it, imply a big price also for core Europe.