Written by Ashish Sinha | New Delhi | Updated: May 30 2011, 04:19am hrs
In what would be a global first, public broadcaster Prasar Bharati is gearing up to auction slots on its free-to-air DTH arm, DD Direct Plus, to private broadcasters. At a base price of R1-1.5 crore per channel and with over 250 channels in queue to join DD Direct Plus, experts reckon that Prasar Bharati could generate R360-400 crore in the first year itself. 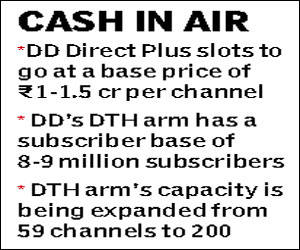 The move is in line with the governments vision of allocating scarce natural resources via a transparent auctioning mechanism.

DD Direct Plus has a subscriber base of around 8-9 million subscribers, including the remote hilly areas and the north-eastern states. Auctions of TV channel slots will replace the carriage fee regime.

The six existing private DTH operators in the country charge a carriage fee of R1.5-2.5 crore per channel.

Prasar Bharati charges a carriage fees or placement fees of R80 lakh/channel) for DD Direct Plus. However, after a legal battle with some private broadcasters recently over allegations of non-transparent mechanism adopted for the addition/removal of private channels on its DTH platform, Prasar Bharati has zeroed in on auctioning of slots as the best recourse, Prasar Bharati sources told FE.

Initially, a closed tendering process may be adopted and Prasar Bharati will gradually shift to e-auctions. The private channels will come on board for 12 months, a DD official said.

DD Direct Plus is important for private broadcasters as it ensures a wide reach across the country, which in turn helps them generate substantial advertising revenue.

Prasar Bharati has already initiated the process of expanding the DTH arms capacity from 59 channels to 200 channels. While 20-25 slots will be reserved for Doordarshan, the rest would be auctioned to private broadcasters in a phased manner, sources said.

Not only will the auction make the broadcaster financially independent, it will also bring in transparency in spectrum allocation on DD Direct Plus, Prasar Bharati sources said. Prasar Bharati has initiated steps for better spectrum management on the DTH platform by moving from Mpeg-2 compression technology to Mpeg-4, which translates into more channels per satellite transponder.