Written by Sharad Raghavan | New Delhi | Updated: Apr 2 2011, 08:36am hrs
The more criminal cases politicians have registered against them, the higher the likelihood of them being elected to power. This was one of several findings in a paper presented at second day of the Columbia-NCAER conference on trade, poverty, inequality and democracy.

The paper, titled 'India: Election Outcomes and Economic Performance' by Poonam Gupta of ICRIER and Arvind Panagaria of Columbia University, also found a strong correlation between economic growth and re-election of the incumbent party to power. The entire study was carried out on the 2009 elections, in which the Congress party came back to power in a strong manner, a deviation from the 2004 elections, when the incumbent BJP party was resoundingly defeated.

The study covered 19 states (excluding the Union Territories, North East states, Jammu and Kashmir and Karnataka), and found that voters rewarded high economic growth. It found that incumbent parties in high-growth states won 85% of the seats they contested. In contrast, those in medium and low growth states could win only about 52% and 40% of the seats contested, respectively (see table). However, Gupta did point out that there was a non-linear correlation between growth and re-election; medium growth was less likely to register with voters than stellar growth, thus not inspiring them to vote on that basis. 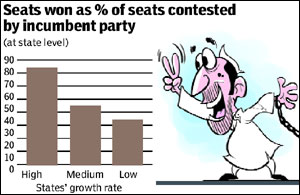 The researchers also found a strong correlation between incumbency and re-election. There was a 97.2% chance of an incumbent candidate being in the top four (the researchers found that the top four candidates accounted for 90% of all votes), and a 47.5% chance of victory, as compared to a 23.3% chance of being in the top four and a 4.7% chance of winning for non-incumbents. Further, the paper says that combining incumbency and high-growth in the state is more or less a recipe for success. Quantitatively, the effect of being a candidate of the state incumbent party in high growth states dwarfs the effects of any other factors, and thus can indeed be a determining factor in the election outcomes, the paper said.

The other factors that the researchers took into account were candidates' wealth, education and criminal record. Nearly half of the top four candidates came from the lowest wealth category of Rs 5 million or less. However, it was found that the unconditional probability of victory rapidly rises with wealth: while three-fourths of the candidates belong to the bottom two wealth categories, only little more than a quarter of the elected candidates come from the latter. In other words, 56% of the winning candidates possess at least Rs 10 million in declared wealth.

As far as education goes, the researchers found that while half the candidates had an undergraduate degree or higher, this figure is 80% among the winners. Four out of every five members in the 2009 Lok Sabha have an undergraduate or higher degree. Contrastingly, while around 100 candidates with no formal education contested elections, none actually won.

NK Singh, Rajya Sabha member, said while illuminating, the paper failed to take corruption into account. Corruption, he said, especially in slow growth states, played a large role in determining votes, along with inflation. This was said following a remark by Surjit Bhalla, the discussant on the paper, that inflation was an important criterion of deciding votes that hadn't been incorporated in the paper. Singh also said that longer term analysis of elections must be done, conclusions should not be formed on the basis of just one election. The paper also failed to take into account coalition politics.