Column : Where have all the subsidies gone

If one has a good idea of where we went wrong in the last 5 years, one can begin to project the future and what the finance minister might or might not be able to do on February 28, 2013. No matter what the source, the discussion, and complaint, has centred on the fiscal deficit. And the fiscal situation is direan increase of nearly 2 percentage points in the consolidated fiscal deficit in the last 5 years. 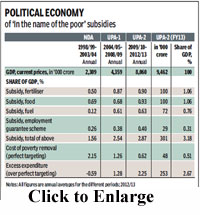 But fiscal deficit is the net difference between revenues and expenditures. So, theoretically, the fiscal deficit can expand because of a shortage of revenues, or an excess of expenditures, or both. Consequently, depending on ones ideological preference, the emphasis is either on raising taxes or on cutting expenditures. And given a country like India, whose politicians and many of the glintelectuals (glitterati intellectuals) do not believe in any evidence-based policy, the concentration is on raising taxes. The last 2 months have been dominated by discussions of how to raise tax revenue, and of course motherhood dictates that one cannot go wrong by suggesting that the rich should pay more. If it is pointed out that the top 10% of earners in the country pay for almost all of corporate and individual tax revenue, the refrain of the glintelectuals is: why cant they pay more

Back-of-the-envelope calculations for the Indian economy are now made easier with several important numbers approaching 100 or multiples of 100 levels! Nominal GDP in 2012-13 is estimated to have been R94.6 lakh crore; for 2013-14, with 12% growth, nominal GDP is estimated at R106 lakh crore. For the same year, poverty is forecast to be 220 million or 18% of the population. This based on a Tendulkar poverty line equal to R1,000 per capita per month (pcpm) and the average consumption level of the poor equal to R834 (R12,000 and R10,000 on an annual basis).

These simple calculations, assuming conservative historical trends, imply that the government needs to spend, in 2013-14, R0.44 lakh crore (obtained as the multiple of 220 million poor with an average poverty deficit of R2,000 per person per year). This fraction is 0.4% of GDP and what is needed to be spent on the poor in order to claim that India is a land with NO poverty according to the official poverty line. This claim assumes perfect targeting. Further, the amount needed to eliminate poverty declines with economic growth. In 1983, the perfect targeting outlay was equal to 7.8% of GDP and, in 2004-05, 1.6% of GDP.

Assume for a moment that the government was actually desirous of doubling the real incomes of every poor person in India. This will mean an outgo of nearly R2,20,000 crore each year and will push every poor person in India to a consumption level above the poverty line. The table documents the actual expenditure on various inventive poverty reduction schemes that Indian politicians have offered and spent grandiosely on.

The trend in the averages are striking. Under Vajpayees tenure, when incomes were low, the government spent close to 1.6% of GDP on poverty-reduction programmes. India was a lot poorer 10 years ago and could not afford the average perfect targeting requirement of 2.2% of GDP. During UPA-1, this deficit turned into a surplus (India became less poor) but the populist government spent twice the amount needed to remove poverty. The situation has worsened considerably in UPA-2, and in 2012-13, the government is spending more than 6 times than what is needed.

Of course, perfect targeting is not possible, and all the money saved from elimination of subsidies should not go to the poor. Indeed, should not go to anybody, but should go to help make India look more like a modern economy than a poor cousin of Chavezs Venezuela. And Venezuela has oil to squander.

This simple analysis has several implications for Indian policy making and the Budget. For starters, all this talk about raising tax rates, imposing commodity taxes, increasing dividend taxes, etc, is shown plainly to be what it isutter and glib nonsense. The gains to be made for the Indian economy are by drastically reducing in the name of the poor (INP) expenditures. The talk should not be in terms of motherhood reductions of the fiscal deficit but reductions in the even more politically-correct motherhood expenditures on the poor.

It is time we recognised the debate on INP policies. Several people will lose if a reorientation is made. Many of these people are politicians, many more are in major political parties, and I would conjecture that a large amount of the leakage ends up in the coffers of political parties as election financing. These men and women are powerful and stand a lot to lose if money meant for the poor reaches the poor. How much is this leakage or corruption Rajiv Gandhi had conjectured (Congress party leaders please note), way back in 1985, that 85% of the money meant for the poor was lost in transition. And Rajiv Gandhi was a raging optimist. 15% of R3,01,000 crore is R45,000 crore, and even if this fraction of money did actually reach the poor, poverty in India today would be less than 5%, if not zero! In other words, money for the poor leaks awayindeed, floods away.

The choice for India, and Mr Chidambaram, is crystal clear. We need to abandon the reckless adventurism of UPA-2 (and parts of UPA-1). Budget 2013-14 should be about subsidy control, and about considerably improved targeting. Technology in the form of Aadhaar is now available; cash transfers are an important component of anti-poverty policy in most countries. The Budget should remember the insight of Rajiv Gandhi, and it should concentrate on the relationship between outlays and outcomes.

Surjit S Bhalla is chairman of Oxus Investments, an emerging market advisory firm, and a senior advisor to Blufin, a leading financial information company. He can be followed on Twitter: @surjitbhalla