The Gujarat state election is on, and many contend that Mr Narendra Modi is a likely contender for the top slot on the BJP ticket in the national 2014 election. His detractors, primarily amongst the ruling Congress party, point to the 2002 Gujarat riots as a strong indicator that Modi is unfit for the job. Given the Congresss alleged involvement in the 1984 Sikh riots, it is a bit improper for Congressites to level charges of murderous riots against anybody. 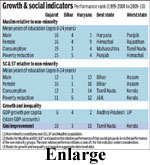 Inclusion is another word for good governance and good governance generally implies equitable growth. And equity should incorporate concerns about gender, caste and religion. As a first step, let me offer two different indicators of growth, and four different indicators of equity. The two years chosen for analysis are 1999-2000 and 2009-10. These years correspond to availability of NSS household data. The two growth indicators are (1) per capita growth as given by state GDP accounts, and (2) state per capita consumption growth as given by NSS data. The NSS data on consumption miss out more than half of national accounts consumption and may not be an accurate indicator of growth or welfare gains, but are reported here in the interests of completeness.

For equity, there are four indicators. There is change in inequality, change in poverty reduction, and improvement in male and female youth education (years of education, ages 8 to 24). Except for inequality, all the other changes are computed for three different classes of people: Muslims, scheduled caste and scheduled tribes (SC/STs) and the remainderthe non-minorities. If the minorities share equally in the growth process, then the growth indicators should be broadly comparable. However, this simple comparison becomes problematic for indicators like education and poverty reduction. These are subject to ceiling and floor constraints. In such circumstances, a rank ordering of relative performance is preferable; the reference group for each indicator is the growth observed for the non-minorities in the same state.

Much has been written about the spectacular growth of agriculture and GDP in Gujarat. Numbers in the double-digit range for both variables are popular. The facts suggest otherwise; first, regarding agricultural growth, average annual growth since 2001 has been 6% per annum; for agriculture excluding forestry and fishing, the average increases to 6.6%. This performance is clearly better than average, and among the top three states, but double-digit estimates of agricultural growth are a vast overstatement of the underlying reality.

On GDP growth, Gujarats record under Modi is very impressive. For the 2001 to 2010 period, Gujarat grew at 8.2% per annum, the fourth fastest growing state. If one controls for its high level of initial income (a higher base) Gujarats growth record looks even better, and by some calculations, becomes the best performing growth state. In terms of NSS consumption growth from 1999-2000 to 2009-10, Gujarat emerges as the sixth fastest growth state. In terms of aggregate poverty reduction, it has the seventh best decline.

Unfortunately, this growth performance is not equalled by the equity or inclusion indicators. Muslims perform disastrously on several fronts, and the SC/STs perform only marginally better than the Muslims. For the minorities, Gujarat is clearly not the preferred location. For gender equity, only one variable is availableeducation. Except for two states, the universal pattern is that for minority girls to experience a higher growth in educational attainment than non-minority girls. The two exceptionsJ&K and Gujarat, and Gujarat is the worst.

The accompanying table presents some tentative findings relating to growth and equity in Gujarat and other states for broadly the Modi period of governance, 2001 to 2010. The results for three statesGujarat, Bihar and Haryanaare presented along with the best and the worst state in each category. Looking at poverty reduction, the table can be read as follows. Between 1999-2000 and 2009-10, poverty declined in all states, and for all socio-economic groups. However, relative to the poverty decline experienced by the upper caste non-minority (and possibly upper class as well) group, SC/STs in Gujarat ranked 11th, SC/STs in J&K performed best, and SC/STs in Kerala performed the worst. Kerala was also the worst performing state in terms of change in inequalityboth real (adjusted for rural urban price differences) and nominal consumption Gini increased from 0.30 to 0.38.

It is unlikely that availability of data for the last two years, 2010 to 2012, will change any of the findings. Gujarat will remain one of the top states for GDP growth, and one of the worst states for equity and/or inclusion. Interestingly, Bihar over the last decade is near the top in both growth and equity.