With a dramatic fall in NELP contracts awarded, especially to private sector, its time to review the policy

The government is understandably perturbed about the sharp hike in Reliance Industries capital costs in the KG Basin and the equally sharp fall in its productionand now even the reserve estimates, following Nikos statementbut it has largely itself to blame. In line with what various other countries do, its time for India to move from the current investment-multiple regime where, only after the operators costs are paid for from the oil/gas produced, does the government get its share in profitsif you have a flat revenue-share model where only the topline revenue matters, monitoring it is relatively easy and, most important, the government doesnt need to get into the oil companys business. And since, in this model, it doesnt matter if the costs incurred by a Reliance are high or low, the government doesnt need to give permission for oil companies to hire a rig or to approve some other cost. In other words, no CAG report and no delays in work! 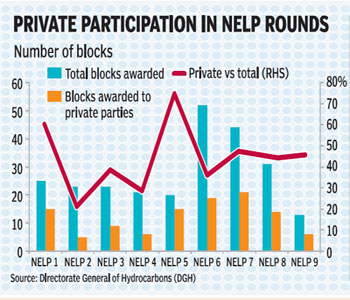 Nor is it true, as some argue, that the revenue-share model works only where exploration risks are lowaccording to this argument, the current investment-multiple regime ensures oil firms get their initial capital back and so encourages risk-taking. The reason why this isnt true is that firms get their money back only if they find oil, so the element of risk is similarwhile it is true the payback in a revenue-share contract is slower than in an investment-multiple one, the simple solution is that firms will bid lower revenue-shares. But it will be a cleaner and more efficient system which will allow faster exploration activities. Fortunately, the prime minister sees some merit in this, and theres a committee under PMEAC chairman C Rangarajan that is looking into this. 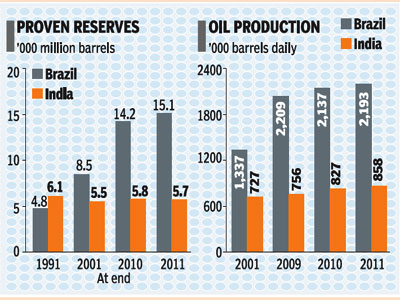 The sharp fall in Reliances gas production and the government responseto order it to drill more wellsis even more interesting. Given how geologists drill a well of 20 cm diametre to come to a conclusion on geological reserves over 2-3 square kilometres, theres bound to be a difference in the view of a Reliance and a Director General Hydrocarbons (DGH)see how even Reliances partner Niko reduced its estimates of the gas reserves to a fourth around two weeks ago. Why doesnt the DGH bring in third-party global experts to examine the basin detailsindeed, having a panel of the worlds best experts is what is needed on a regular basis. This, by the way, will also resolve the suspicion that Reliance is deliberately suppressing production till the time gas prices rise!

It will also, to a large extent, resolve the near-complete lack of flexibility in contracts. In the Reliance case, one of the disputes is over the number of wells Reliance should drill and their location. While Reliance had, in its initial work plan, promised to drill a certain number of wells in one area, after drilling a few wells, it decided no purpose was to be served by drilling more wells as the area didnt have enough potential. The DGH, however, insists RIL drill more wells here. A panel of third-party experts here is clearly critical, to allow DGH to be more flexible.

While the move towards revenue-share contracts, provided Dr Rangarajan approves it, will help new explorers, what happens to existing contracts such as Reliances or Cairns Thats a serious issue that needs resolving. Right now, all decision-making has to be done through a management committee (MC) that has government representatives on itbut thanks to a shortage of people, there are several instances of production blocks where just 1 or 2 MC meetings are held in a year as opposed to at least 4 in a year.

There are then the abrupt changes in the taxation regimethis ranges from the sudden removal of natural gas from the tax-holiday list to, in the case of Cairn, the government forcing it to take on payment obligations of ONGC (http://goo.gl/gsBRP). And thanks to the petroleum ministrys stand in the Mukesh-Anil fight over gas, the Supreme Court even ruled the oil company has no right to decide whom the gas will be sold toit is a mere contractor. In another case relating to Cairn, thanks to the government not doing its homework, the company had to shut operations in 4 exploration blocks when it found it could not access them because they were part of a naval exercise range, army firing range, or the department of space had objections (http://goo.gl/q7MyZ)it planned to spend $150 mn here. And its not just private firms, even PSUs have a hard time. ONGC bought 90% of Cairns KGDWN 98/2 in 2003 and even sold 15% of equity each to Petrobras and Statoil who were to help do the explorationthe exploration budget was $1 bn, leading to a $5 bn development budget eventually. In December 2009, ONGC applied for permission to drill 6 more exploratory wellsit got permissions two weeks ago, by which time both Statoil and Petrobras had tired of waiting and sold the equity back to ONGC!

Not surprising then that the government is finding less success with each NELP round (see graph)while private participation is down dramatically (around 70% of NELP contracts were given to private firms in NELP V and this fell to 45% in NELP IX and global majors like Shell and Exxon do not even participate), even the number of blocks being awarded is down and just 38% of the blocks offered in NELP IX were awarded.

Another issue to consider, in the context of NELP not really delivering the way it was expected to is to move to Open Acreage Licensing Policy where oil firms can choose the blocks they want (as opposed to the government delineating the blocks) and putting these up for auction on a continuous basis. Perhaps, after he finishes with the investment-multiple vs revenue-share contract, thats another task for Dr Rangarajan