Tax rate increases are in the air, especially since all of us have read about the fiscal cliff in the US, the 99% versus 1% fashion, Mr Hollande of France (an economy closest to us in its non-economic and Luddite views) proposing prohibitive tax rates on the rich, etc. 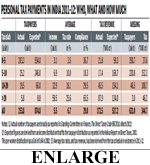 Dr C Rangarajan, adviser to the Prime Minister, stated, appropriately on the Financial Inclusion day, that one need not disturb the structure of income tax system as it is now. But add a surcharge for income above particular level. I believe as we go along, we need to raise more revenues and the people with larger incomes must be willing to contribute more.

Note the populist appeal to the super-rich. They should be willingor else, off with their heads (income). As discussed in my earlier article (Taxing the rich and other fantasies, FE, January 23 http://goo.gl/Mcini), there is precious little evidence to support Rangarajans recommendation. What the data do suggest, and documented extensively below, is that the reason that tax revenue is considerably below potential, is because the middle income group, those earning between R5 lakh to R10 lakh, is quite unwilling to pay taxes, even at an average tax rate of 10%! And that the most willing are the super-rich, those earning above Rs 20 lakh a year. The raise tax rates recommendation should be junked, especially since stable tax rates have generated good tax revenue and allowed compliance to increase more than three fold from the abysmally low levels which prevailed prior to the 1997-98 budget.

Until 2005-06, India, via CAG reports on the ministry of finance, had access to data, some data, on the distribution of income and taxation. After thatwhooshall the information stopped. Now the reports only reveal the total number of taxpayers in the economy, about 3.24 crore, out of which about 1 crore file tax returns but dont pay any tax because their incomes are below Rs 1.8 lakh.

What the tax department, and all of us, should be interested in is maximizing tax revenue. The table reports all the relevant tax parameters for fiscal 2011-12who pays taxes, who should pay taxes, rates of taxation, revenue collected etc.

The total amount of personal income tax (PIT) that could have been collected in 2011-12 was R5,17,000 crore or R5.17 trillion. The total amount that was collected was R1.72 trillion indicating an overall compliance rate of 33%. So, two-thirds of the taxable population avoided paying taxes altogether or paid two-thirds less taxes than they should have.

The largest share of missing taxes is among those earning between R5 lakh and R10 lakh a year. They are in the top 7% of the population, they number around 25 million, and only about 10% of such individuals pay any tax. How much missing taxes are in this group, a group for whom the average tax rate is only 10% About equal to the entire tax collected in 2011-12: R1,50,000 crore.

About R1 trillion is lost among those earning between R10 lakh and R20 lakh a year. Such individuals are in the top 2% of the population, and only a third of such individuals pay any tax.

The super-rich or those earning more than R20 lakh a year: There were 88 lakh such individuals and 58 lakh paid taxes, yielding a compliance rate of 66%. Missing taxes for this group, R0.46 trillion, or only 13% of the entire amount of PIT missing in India.

If compliance levels stay the same, a surcharge of 3% on super-rich incomes will yield about R2,600 crore. Alternatively, the government could make an effort, with support from its tax administration officials, to reduce corruption, reduce black money, and increase taxation among the top 7%. If compliance in this group was brought to only the average of the economyi.e. 30%that alone would generate an extra R35,000 crore, i.e. 5 million extra taxpayers, paying an average tax rate of only 10%, on average incomes of R7 lakh. Okay, if tax administration increased compliance by only 3 percentage points, from 10% to 13% among this middle income group of R5-10 lakh, the extra revenue gained would be R5,250 crore, or double that gained from putting a 3% surcharge on the super-rich.

These simple calculations yield at least three recommendations. First, it should be mandatory on the finance ministry to release data on tax compliance by income groupsa practice common in most economies in the world. Surely, no one can oppose the release of this statistic so why isnt it being practiced Possibly because it will cast a very black shadow on the workings of the tax administration in India Second, the biggest revenue gainer is via an increase in compliance, especially for the middle income group. Third, stop thinking of populist measures like surcharges on the super rich, or copy French measures like increasing tax rates for anybody. If any such measures are introduced in the budget, it would not be a responsible budget that the finance minister has promisedand not responsible by a long shot.

Surjit S Bhalla is chairman of Oxus Investments, an emerging market advisory firm, and a senior advisor to Blufin, a leading financial information company. He can be followed on Twitter: @surjitbhalla