There are several policy answers awaiting approval of the new finance minister Dr Manmohan Singh. While the immediate task is to engineer animal spirits and confidence, the more important task is to restore the economy to its previous good health. And there is no better place to start than to revisit its policies on the pricing of agricultural output. 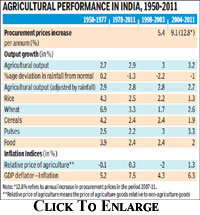 It has been a hallmark of mistaken Indian policies, especially under the UPA regime, that if you raise farm prices, you will help food production, farmer welfare, the Indian economy, and help the electoral fortunes of the Congress. The respected agricultural economist and current chairman of the Commission of Agricultural Costs and Prices, Mr Ashok Gulati, has obtained a large increase in the procurement prices of rice. As the Congress wolf granny might say, It is all to help the aam farmer, my dear.

There is no question that the increase in procurement prices helps the rich, kulak farmers of Punjab. And rich farmers elsewhere. And the intermediaries in the Food Corporation of India (FCI). But what the Congress has failed to answer is how does an increase in the relative price of food (i.e. increase in food prices above the rate of inflation) help the poor landless workers and the poor farmers unable to sell any produce to the agents of the FCI Recall that less than a third of the total produce is procured by the FCIand it is nobodys case that the small farmer obtains the premium FCI price. The small and poor are much more numerous, both as poor individuals, and as poor voters. But where is the aam aadmi logic of the Congress party

If the Congress were to reflect on its record, it would find that both in terms of overall economic and political performance, it has performed worse than any other government in Indian history. While many justifiably accused Ms Indira Gandhi for worse to worst economic policies, and worse to worst destruction of institutions, no one has accused her of being an unclever politician. But the record of UPA-2, and Ms Sonia Gandhi, is one of bad politics and bad economics. For the latter, one has to only look at the record of UPA-2 on growth, inflation, the current account deficit, the rupee, corruption, the lack of confidence, the lack of animal spirits, etc. For politics, one has only to look at the large number of Congresswallahs who have lost their deposits in practically every election held since May 2009.

But the Congress can claim that by raising procurement prices, they have done good for greater food production in the country. And since their own high-profile staff in the National Advisory Council (NAC) claim that almost three-fourths of the country goes to bed hungry every night, maybe the Congress has unselfishly helped the nation. So what if food prices go up, and the poor cannot afford foodat least the country is producing food at a faster pace!

The table documents the data on agricultural production and related statistics for four time-periods: 1950-1977, 1978-2011, 1998-2003, and 2004-2011. Rainfall data since 1871, properly weighted by area under crops, indicates that during the NDA rule, rainfall in the five years ending in 2003 was among the 15 worst such periods since 1871. In contrast, the five-year rainfall during the lucky UPA rule has been slightly better than average. So when the data in the table are examined, this important fact should be kept in mind.

What the kulak policies have achieved is an increase in food subsidies, and overall inflation. And no increase in the rate of growth of agricultural output. And India has paid heavily for this grotesque miscalculation. There are other causes of high inflation, but high procurement prices for food seems to be a major cause. Each 10 percentage point increase in the average procurement price increases the inflation rate by 3 percentage points. But the damaging effect of the kulak policies is enlarged by the domino effects in monetary policy. RBI does not distinguish between administered food inflation, and demand pull inflation. So it raises interest rates to further diminish non-agricultural output. And the sequence goes on, much to the detriment of the Indian economy. Wouldnt it be a lot better for India if the finance minister and his technocratic agriculture price-setter met with the RBI Governor and sorted out the mess that is the Indian economy and Indian policy making