Prices of coarse grain, without the minimum support price (MSP) cover, have risen faster than those of key grain during 2008-2012. During intervals between two crop seasons, farmers who cultivate coarse grain like jowar (sorghum), maize (corn), ragi (finger millet) and bajra (pearl millet) saw their income rise sharply in these years yet another reason why rural income growth is outpacing the urban one and why the population is increasingly resilient to persistent high inflation. 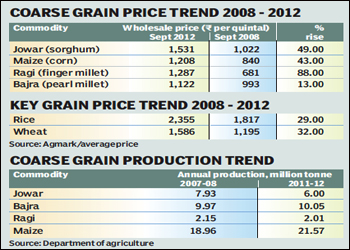 Coarse grain are grown mostly in dry and rainfed regions of Rajasthan, Madhya Pradesh, Karnataka and Andhra Pradesh. While the government procures rice and wheat from farmers by providing minimum support price (MSP) through the Food Corporation of India and state government-owned agencies, in the case of coarse grain only jowar gets MSP coverage.

Food companies like Pepsi, Britannia and ITC have started procuring these coarse grain as multi-grain diets catch up fast with health-conscious urban consumers.

Ragi has seen the highest jump in prices during last five years as demand for the calcium-rich grain, which also helps lower cholestrol levels, has shot up, mostly in southern India.

Bajra, which is historically part of the diet in Rajasthan, has also seen a moderate rise in the last five years. However, in Rajasthan, bajra prices have risen by more than 68% during same period. Bajra consumption is rising steadily elsewhere too, as it contains high amounts of proteins and iron.

Industry sources said attractive returns have lured even cotton farmers in Punjab to try these commodities.

The government must include distribution of coarse grain to poor families under the proposed food security Bill for providing nutritional security to large masses of people, Ajay Vir Jakhar, chairman, Bharat Krishak Samaj, told FE. Jakhar said the move to include coarse grain under food security legislation would help the government in procurement of grain which are locally available.

The government had been focusing on procuring wheat, rice and sugarcane from the 1970s, resulting in a surge in their production. In the absence of MSP for most coarse grain, their area under cultivation had been static.