Keeping in view the current crisis in the industry, the Confederation of Indian Textile Industry (CITI) has urged the textile ministry not to grant unilateral trade concessions to competing countries like Bangladesh and Pakistan, which enjoy lower cost of production. 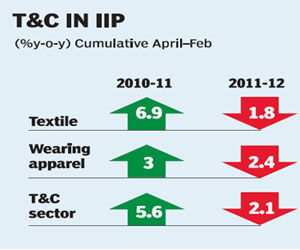 According to CITIs chairman SV Arumugam, there is an urgent need to to avoid unilateral trade concessions to competing countries like Bangladesh and Pakistan.

If any such concessions are given to the neighbouring countries then there should be a corresponding additional access available in such countries for Indian textiles, said Arumugam.

There were reports that the government was considering a proposal to provide similar trade concessions to non-LDC members of Safta with reference to imports from Pakistan which would have serious impact on the industry.

Arumugam said, In case of Bangladesh, we explained that the rules of origin should be changed to stipulate utilisation of domestic or Indian raw material as the eligibility criterion for zero-duty access in our market.

CITI secretary-general DK Nair said, The IIP figures of the the textile and clothing sector reveal that IIP growth rate has been negative and the liberal trading arrangements with the textile-producing countries like Bangladesh have started to hurt the Indian textile industry. After the zero-duty access was provided to all LDCs of SAFTA, imports of garments from Bangladesh has been rising in substantial proportions, he said.

During April-December 2012, there has been an increase of 123% in import of garments from Bangladesh compared to the same period last year, though the base was not very high. The zero-duty access provided to LDCs in SAFTA is subject to Safta rules of origin which stipulate only 30% local content for textiles.

Nair further said converting Chinese fabrics into garments in Bangladesh would invariably lead to 100% local value addition and therefore the concession given to Bangladesh for garments is indirectly available to China for fabrics.