Choosing between hard and easy paths

Written by Ranen Banerjee | Updated: Feb 27 2013, 13:16pm hrs
The most significant reform initiative taken by the government of India in public financial management is the Fiscal Responsibility Budget Management (FRBM) Act. The Act mandated that the government achieve 3% fiscal deficit and revenue balance by 2008-09. As shown in the graph above, fiscal indicators did improve during 2004-08, with the fiscal deficit averaging 3.6%. The global economic meltdown had impacted the Indian economy and there was a sharp increase in the fiscal deficit from 2.5% during 2007-08 to 6% in 2008-09. The revenue deficit has moved from 1.05% in 2007-08 to 5.25% in 2009-10 and the primary balance turned deficit in 2008-09 after running in surplus in the previous years. The fiscal slippage has primarily been driven by the low economic activity starting with 2008-09, which had derailed the fiscal consolidation process that started post the enactment of the FRBM Act. 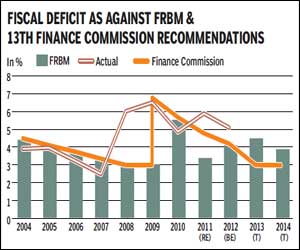 The fiscal deficit, after reaching as high as 6.5% of GDP in 2009-10, came down to 4.9% in 2010-11. However, it again shot up to 5.9% in 2011-12 owing to a deceleration in economic activity, which negatively impacted tax collections. Revenue receipts as a proportion of GDP fell from an average of 10% in the preceding 5 years to 8.5% in 2011-12. This is despite a plethora of measures to enhance tax revenue, such as increasing the central excise rate from 4% to 5%, making ready-made garments subject to excise duty of 10%, etc. Revenue expenditure continued to grow, albeit with a mild moderation. Nonetheless, capital expenditure has witnessed stagnancy in 2011-12. It grew by a meagre 0.1%, reflecting the burden of fiscal adjustment on the economic catalyst sectors.

The path of fiscal consolidation remained quite bumpy in the past two years. In 2011-12, the efforts to contain the deficits were targeted towards increasing revenue collections by increasing the tax rates and by bringing additional services under the fold of the service tax net.

In 2012-13, the fiscal consolidation measures are based on receipts that are temporary in nature, such as disinvestment proceeds and auction of spectrum. On the expenditure side, there is a deceleration in plan expenditure. As of December 2012, plan expenditure in many critical departments remained low as against budgetary estimates. This was 18% in case of the ministry of power, 54% in the case of the rural development ministry, 53% in the department of school education and literacy, and 54% in the department of health and family welfare. It is difficult to spend more than 33% of budgetary estimates in some cases in the next three months (last quarter of FY13). However, the attempt to curtail non-plan expenditure is yet to be realised fully. Major departments such the ministry of rural development (73%), health and family welfare (94%), and school education and literacy (73%) have spent more than 70% of their budgeted non-plan expenditure in the first three quarters of the financial year.