While global trade growth has plummeted in the aftermath of the economic crisis, India has managed to rather dramatically alter the pecking order of its key trading partners.

An FE analysis has revealed that China and UAE have grabbed the major share of Indias trade from the US and EU, conventionally the countrys largest partners.

The US share in Indias total export-import trade was the largest at 10.02% in 2007-08; the world's largest economy (considering Europe, sans the fiscal union, cannot be counted as a single economy), was India's biggest trading ally till that year but lost that status to the UAE in 2008-09. In the following year, China too pipped the US, which slipped to the third slot among India's trading partners. In 2011-12, China became India's largest partner. 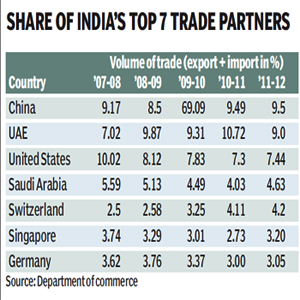 Hit by a prolonged economic slump, the US doesnt appear to be regaining its slot, while both the UAE (thanks to petroleum trade) and China have strengthened their position (see table).

Among other major countries, Saudi Arabias share in Indias total trade is receding. Even pacts couldnt help trade with certain nations. Despite the comprehensive economic agreement that India signed with Singapore in 2005, trade between the two countries have only declined in relative terms since 2007-08, although the initial two years of the agreement were noted for some rise in trade and a reversal in the trend was seen in 2011-12.

On the other hand, trade with Switzerland has consistently gained momentum in the last five years.

The main factor for the decline in the share of most of the countries is due to a huge spurt in imports from China which jumped 40% in three years. With the UAE, the share has gone up as petroleum products and gems and jewellery are largely imported from the emirates, explained Federation of Indian Export Organisations (FIEO) DG and CEO Ajay Sahai.

Our exports were limited to a few markets before 2008, but this changed after we introduced the focus market schemes and offered duty credits. Indias exports now go to more countries. China has grabbed a large share because of its diversified markets and products schemes, said a commerce ministry official. Indias total trade in goods grew from $415 billion in 2007-08 to $795 billion in 2011-12.

In fact, the ministry plans to double Indias merchandise exports from $246 billion in 2010-11 to $500 billion in 2013-14 through an aggressive product promotion strategy for high-value items.

At the core of the market strategy is to retain presence and market share in traditional markets, move up the value chain in providing export products in developed markets and open up new vistas, both in terms of markets and new products, says a strategy paper on the shift in trade away from the US.

Though there is no drop in absolute numbers, experts opine that Indias overall trade with its traditional partners has not kept pace with that of other countries as the former are still reeling under recessionary pressures.

In absolute terms, trade with the US has steadily increased and India's exports have moved from $19.5 billion in 2009-10 to $34.7 billion in 2011-12. No country should keep its eggs in one basket and we are also encouraging exporters to diversify their markets, added Sahai.