Can India afford a sub-normal monsoon

Not with so many dark clouds already hovering over the horizon

In its first assessment released on April 26, the Indian Meteorological Department (IMD) had forecast normal monsoons for 2012 (99% of the long period average, LPA). Recent data, however, suggests that the weather gods are yet to oblige. The rainfall was 43% below the LPA during the first 12 days of June. This by itself is not a serious cause of concern as weak rainfall in June does not necessarily mean an overall bad monsoon season, just as good rains in June do not imply normal monsoons. For instance, despite normal rains in June, 2002 turned out to be drought year. In 2010, the June rain was deficient but overall monsoons turned out to be normal. The worry this year, however, is the prospect of El Nino conditions emerging as a threat to normal monsoons prediction. 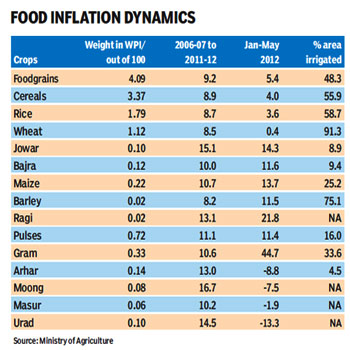 In the recent past, monsoons have often played a spoilsport. The country underwent a severe drought in 2002 and drought-like conditions in 2009. In both these cases, the initial forecast by the IMD failed to predict anything to this effect. The abnormal weather conditions were attributed to the El Nino phenomenon, which impacts the regular movement of the monsoon winds and significantly impacts the extent of rainfall over the subcontinent. For 2012 too, the El Nino threatens the normalcy of monsoons. We, therefore, need to keep our fingers crossed on the monsoon prospects and monitor its progress closely.

With 55% of the total cultivable land in India lacking irrigation facilities, monsoons continue to pose a major risk to agricultural output and food inflation. And every year monsoons generate the same level of anxiety in the month of June. But this year, with so many dark clouds already hovering over the horizon, a sub-normal monsoon is something that India can ill afford. Recent GDP numbers released by the Central Statistical Organisation (CSO) pointed out a sharp slippage in GDP growth to 5.3% in the fourth quarter, which dragged down overall GDP growth to 6.5% for 2011-12. And growth prospects for 2012-13 are not too bright either. CRISIL lowered its growth forecast for the current fiscal year to 6.5% from 7%. And growth in 2012-13 could drop further if the euro zone crisis intensifies.

Given the falling share of agriculture in Indias GDP, it is no longer the prime mover of overall GDP growth in India. During 2004-05 and 2009-10, GDP growth was healthy at 7% and 8.4%, respectively, despite significant rainfall deficiency. The impact of poor monsoons on inflation is, however, expected to be much more pronounced. Food inflation is already elevated, with the wholesale price index of food growing at 10.7% in May 2012. Rain-dependent crops like coarse cereals and pulses have witnessed high inflation in the last few years and have a delicate demand-supply balance due to lack of buffer stocks. Inflation in oilseeds, pulses, jowar and bajra was at 14.3%, 11.3%, 11.4% and 14%, respectively, in the first 5 months of 2012. Inflation in oilseeds and pulses has risen to 19% and 14%, respectively, in the month of May. Normal monsoons are more critical than ever at this juncture to rein in food inflation, which, after a brief decline, has moved back into the double-digit zone. In addition to the organised sector, the MGNREGA wages too are indexed to inflation. The rise in inflation will, therefore, result in higher wages and higher costs of production (wage-price spiral).

While rice and wheat have enough buffer stocks, coarse cereals, pulses and oilseeds are susceptible to the vagaries of monsoons. Coarse cereals are generally not stocked, and existing stocks were at a 4-year low in 2011-12. With increasing rural demand due to consumption-boosting schemes like MGNREGA and sharp increase in rural wages, the disposable income in the hands of rural people has increased. But the lack of investments and productivity improvement in agriculture has restricted the supply for food crops. In this scenario, the prices of many food crops have stayed elevated and remain susceptible to further flare-up from a shock of poor monsoons.

States like Madhya Pradesh, Maharashtra and Orissa are highly vulnerable to monsoon failure as crops are largely unirrigated and these states have a high proportion of GDP originating from agriculture. Maharashtras vulnerability stems not so much from a dependence on agriculture as from the lack of an irrigation buffer (only 19% of its land is irrigated). On the other hand, states like Punjab, Haryana, etc, are highly dependent on agriculture but are buffered against the vagaries of monsoons as around 90-100% of their agricultural land is under irrigation.

On the slightly brighter side, it has been observed that agriculture is no longer synonymous with the rural economy. Agricultures contribution to Indias GDP came down to 19% in 2004-05 from 30% in 1993-94, but the contribution of rural economy to national GDP declined only to 48% from 54% during the same period. Clearly, the rural economy has grown at a faster pace than agricultural GDP. The same trend is likely to have continued beyond 2004-05 given that other sources of income, like those provided by the MGNREGA and sharp increases in wages, have supplemented agricultural income in the rural areas. This somewhat reduces the rural populations vulnerability to the failure of crops because of deficient monsoons in any year.

All in all, in todays depressed growth environment, the economy simply cannot afford a hit against its agricultural GDP. If the monsoons are sub-normal, it would put further pressure on food inflation, which is already elevated. IMD expects the situation to improve in the third week of June. Let us hope that this expectation is not belied.

Dharmakirti Joshi is chief economist and Aindrila Roy Chowdhury is an economic analyst at CRISIL. Views are personal