Indias balance of payments (BoP) situation deteriorated in the March 2012 quarter with the current account deficit (CAD) widening to an all-time high of 4.5% of GDP or $21.7 billion. Exports grew at a slower pace in a sluggish global economy while the soaring prices of crude oil, as also precious metals, had little impact on demand; under the circumstances, the trade deficit came in at a whopping $50 billion. 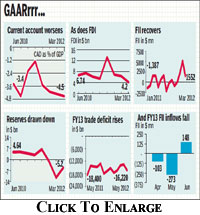 For 2011-12, the countrys CAD rose to $78.2 billion or 4.2% of GDP, the highest levels ever seen, largely the consequence of a higher trade deficit, slower growth in the domestic economy as also a contraction in GDP in dollar terms due to the depreciation of the rupee. Net inflows under the capital and financial account (excluding changes in reserve assets) were higher at $67.8 billion during the year.

There was a drawdown of reserves to the extent of $12.8 billion compared with an accretion of $13.1 billion in 2010-11. The countrys foreign exchange reserves stood at $289 billion as of June 22.

Economists expect the CAD for the current year to ease essentially because of the falling price of crude oil. We expect India's CAD to improve to 3.5% of GDP due to lower oil prices and moderating gold demand which more than offsets the deceleration in exports, Rohini Malkani, economist at Citigroup observed. Malkani pointed out, however, that the BoP is still likely to be in the red due to lower FDI and external borrowings.

Indeed, both FDI as also portfolios could be meagre this year given the relatively unfriendly investment environment in the country. The governments move to amend tax laws retrospectively, its inability to push through policy changes, the failure to usher in foreign direct investment in multi-brand retail, apart from delays in clearing projects, have been perceived negatively by multinationals. The biggest blow to investors has come in the form of the proposed General Anti-avoidance rules (GAAR) aimed at taxing foreign institutional investors (FIIs).

Indeed, if the BoP situation wasnt worse in the March quarter, it was because there was some support from net financial flows (excluding reserve assets) of a fairly robust $16.5 billion. These were driven by strong portfolio inflows and a jump in non-resident Indian rupee deposits thanks to the deregulation of interest rates. FIIs, who bought around $4 billion worth of debt in the first three months of 2012, have sold bonds worth close to $2 billion since then. The same was true for equities; FIIs bought $8.8 billion worth of equities between January and March this year and sold $1 billion worth of stocks since then.

On Thursday, the Reserve Bank of India (RBI) had cautioned that the countrys net international investment position had worsened with rising short-term debt relative to total external debt. The RBI said risks to financial stability had worsened since December 2011, primarily due to global risks and domestic macroeconomic conditions. The external sector vulnerability indicators point to increased risks, the central bank observed in its fifth Financial Stability Report, pointing out that the CAD had deteriorated with decelerating growth in exports even as imports remained high on the back of sustained demand for gold and crude oil.