Big hits to flop shows, earnings are a mixed bag for India Inc

The star of the March quarter earnings season so far has been Maruti Suzuki, which posted a strong set of numbers in what is considered to be a rough period for auto players. Net sales during the quarter were up 9.4%, driven up by smaller discounts even as volumes fell almost 5% on an annual basis, while profits soared on the back of a weakening yen. But, on the whole, its been a bit of a mixed bag for India Inc. Reliance Industries reported a weak performance across segments, especially exploration and production, with a quarterly net profit of R5,590 crore boosted by higher other income and lower depreciation, even as Idea Cellular turned in a stellar performance, beating the streets estimates with revenues rising 8.2% sequentially and earnings before interest, taxes, depreciation and amortisation, a measure of profitability, up 11.7%. Again, while Tata Consultancy Services was able to withstand global headwinds, peer Infosys reported its lowest-ever margins. 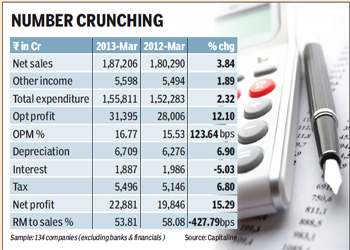 On balance, however, the numbers are weak, though it must be mentioned that very few companies have announced their results. For a sample of 134 companies (excluding banks and financial companies), net sales were up just 3.8% year-on-year, way below the 12% y-o-y seen in the December 2012 quarter and the 17% seen in the June 2012 quarter, which now looks positively robust. If profits have risen 15% y-o-y, its thanks to costs being reined in while total expenditure has risen by just 2.3% y-o-y, the share of raw materials to sales has actually fallen sharply by 425 basis points. Nevertheless, the growth in profits is still slower than the increase of 19% y-o-y seen in the December 2012 quarter and 21% y-o-y for the September 2012 quarter.

In a sluggish demand environment, companies continue to find it hard to push through volumes. Jindal Steel and Powers consolidated net profit fell 35% on an annualised basis and was way below consensus estimates due to a sharp fall in blended steel realisations down 12% y-o-y possibly because the company was liquidating inventories.

Profits at UltraTech fell 16% y-o-y driven down by volumes dipping 4%, while sales at Siemens fell 27% from the previous year with the management going on record to say that the results were impacted by the prolonged slowdown in the economy. Profits are under pressure due to continued delays by our customers in project completion leading to updates in project costs, the company said.

Hero MotoCorps net revenues, though better than estimates, grew just by 2% y-o-y, despite better realisations, which were up 5% y-o-y. Not surprising, then. that the management remain cautious. Pawan Munjal, MD & CEO, said on Friday that his firm remained cautiously optimistic about the growth prospects in the near term.

There are those who sound more confident: N Chandrasekaran, MD &CEO, TCS, said after the announcement of his firms results that the deal pipeline was strong and closures were happening. We are chasing more large deals today both in terms of numbers and value than we were last year and our commentary is that FY14 will be a better year than FY13, the TCS chief observed.

Both the engineering firms that have announced their results, Bharat Heavy Electrical and Siemens, saw higher order inflows but they came off a low base. The bad news is that Indian companies remain highly leveraged and unable to generate adequate cash flows to pay off debt and yet make profits. Raymond , for example, has a net debt of Rs 1,342 crore, but the firms profit after tax fell 81% in the March 2013 quarter, while for FY13 it was just Rs 29 crore.