Written by Yogima Seth | New Delhi | Updated: Jan 2 2010, 06:35am hrs
The automobile industry has struck another positive note with major manufacturers reporting their best-ever sales in the year 2009.

The good showing in the year was chiefly on the back of the governments stimulus package that reduced excise duties to jump-start the sectors growth. The low-base effect of last year is another factor that helped the growth figures.

As reported by FE earlier, the countrys auto sector is poised to record its best sales since 2006-07 this financial year, exceeding targets.

With consistent sales of over 3 lakh units a month for the whole of last year, the countrys largest two-wheeler producer, Hero Honda Motors (HHML), reported its best-ever performance for the calendar year, with sales of over 4.4 million (44,15,298) units in 2009, clocking a growth of 22%. Sales of India Yamaha Motor went up 60% at 2.18 lakh units last year. 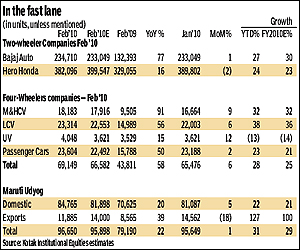 According to a Delhi-based analyst, if the stimulus package is withdrawn and consequently there is a rollback on excise duty across all categories, it would dampen consumer sentiments and slow down the pace of growth as companies will pass on the hike in duties to the customer.

Further, on the back of an anticipated increase in car prices post-Budget and huge discounts offered by most players to offset inventory, these car manufacturers have posted high double-digit growth even in December 2009. Domestic sales of Maruti Suzuki India surged by 36.5% last month at 71,000 units compared to 52,029 units during the same month in the preceding year while its closest rival, Hyundai Motor India posted a growth of 42.3% at 22,252 units vis--vis 15,602 units in December 2008.