Written by Subramanian Shankar | Updated: Jan 26 2010, 05:32am hrs
Cashing in on the recovering economy and festive season, Indias largest paint company, Asian Paints, turned in a stellar set of numbers for the December 2009 quarter. The company has managed to extract better operating leverage, even as raw material prices remained benign.

Of course, the results need to be read in the context of a weak December 2008 quarter, a time when the Indian economy was going through a rough patch and sales growth of the company barely made it to double-digits. In fact, profits had come off by just over 50%.

Nevertheless, the topline at Rs 1,280 crore, an increase of 27% year-on-year, was impressive. The growth, according to industry watchers, would have been driven by a 20% growth in volumes. Also in 2008-09, the company had taken a near 17% increase in prices spread over six takes. The idea was to pass on the higher input costs. Thanks to its strong brand equity, the company has not lost market share and continues to enjoy a 50% share in the decoratives market. Kotak Securities believes that the company would have gained a share in the organised market.

In 2009-10, the company is not that keen to increase prices to offset higher input costs. Our pricing will be based on overall strategy and market share gains. And more importantly, on what the customer is able to bear, says Murty.

Says PM Murty, managing director & CEO, Asian Paints, The demand has been better than expected and this is true especially of the Tier-II cities. Business is brisk in the smaller cities though we dont know whether this trend will continue. 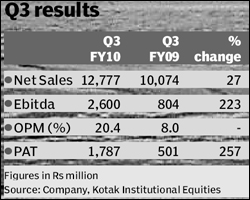 Kotak Securities continues to expect recovery in urban markets and sustained demand growth in Tier-II and Tier III-markets. Incidentally, Asian Paints has a strong presence in the southern market. However, competitors like Sherwin Williams are increasing their presence in the south. While they may nibble at the share of Asian Paints, it would nonetheless retain its spot as the market leader in the decoratives space.

And, thanks to rising aspirations, its the top end of the range thats selling better. Observes Murty, Both interior & exterior emulsions continue to do well while distempers & enamels are growing at a lower pace, even below the rate of growth of the market. According to analysts, approximately 35% of the companys sales are earned from emulsions. Competition in the emulsions segment is increasing but price should not be a differentiating factor.

The company has the best gross margins in the industry, as Kotak Securities points out. As a result, the companys operating profit margin came in at a strong 20.4%, higher than the brokerages estimates.

However, Murty remains circumspect on the profitability of the company going ahead, given that there is some new competition coming into the marketplace. Says the CEO, Demand has been growing, but theres also some competition. Under the circumstances, we dont think margins can sustain at the current levels. We believe that despite prices of raw materials remaining benign, operating profit margins could head back to levels of between 14% and 16 %.

The improvement in the operating margins had much to do with savings in raw materials. But Asian Paints has also gained hugely from the reduction in Cenvat. More importantly, the company is seeing the benefits of better operating leverage. For example, in the December 2009 quarter, it gained a saving of nearly 100 basis points in staff costs and around 375 basis points in terms of other expenditure.

Kotak Securities observes that higher competitive intensity is not an immediate threat to the companys performance. The firm is bullish on Asian Paints, given continued strong signs of: (i) good demand conditions in Tier-II and Tier-III towns; (ii) shorter repainting cycle driven by likely improvement in penetration; (iii) likely return of demand in key metros; and (iv) market share gains from the organised segment. Additionally, the company has also differentiated itself in the market through voluntary compliance with environment norms.

Not surprisingly, the companys net profit for the quarter was up 257%, at Rs 179 crore.