Written by fe Bureau | Chandigarh | Updated: Jul 3 2010, 09:43am hrs
To showcase the glorious history of the Sikhs to the world, the Shiromani Gurdwara Parbandhak Committee (SGPC) has for the first time produced a film Baba Banda Singh Bahadar, the worldwide release of which was done at a media-conference in Chandigarh on Wednesday. It is also the first time that a live character has been allowed to play the role of a Great from Sikh history.

Hailing it as a good initiative by the SGPC to showcase the immense sacrifices made by the great Sikh martyrs for safeguarding humanity at large against tyranny and oppression, Sri Akal Takht Jathedar, Gurbachan Singh said let it inspire the misguided among the Sikh youth to shun all vices like drug addiction and follow the tenets of Sikhism in its true spirit. Endorsing his views SGPC President, Avtar Singh said the film was an apt tribute to the grit, determination and dedication of Baba Banda Singh Bahadar coinciding with the celebration of 300 th anniversary of the Sirhind Fateh Divas. He expressed confidence that the Sikhs worldwide will watch it and get inspired by the sacrifices made by their forefathers.

According to writer-director Harjit Singh Ricky, who has several Punjabi tele films, TV serials and Punjabi and Hindi music videos to his credit, said though the one-hour film was conceptualized by the SGPC at the 300th anniversary of the Sirhind Fateh Divas held in May this year, he had been doing research on Baba Banda Singh Bahadar for nearly a year. 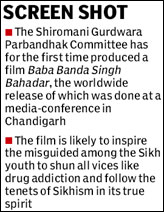 When SGPC handed me the responsibility for making the film with the shortest of deadlines, we immediately sprung into action. We wrote the script and got it approved from the film committee of the SGPC. We zeroed in on Gurpreet Singh, an assistant production manager from one of the national television channels, to play the role of Baba Banda Singh Bahadar because he fit into the role perfectly. He is a gursikh, possesses a good height and physique and is a good horse rider.

For locations we explored far off places like Kala Amb and Paonta Sahib in Himachal Pradesh but then somebody suggested a location closer home. We settled for a place near Dharak village,, just off Chunni, near Mohali, which offered a big field and adjoining jungle. It coincidentally turned out to be the same route taken by the forces led by Baba Banda Singh Bahadar while moving from Chapar Chiri to attack Sirhind. An Indoor set was also created at Amb Sahib Gurdwara in Mohali. VFX (special effects) has been deftly used not only to make the movie slicker but also to save time and money.

Sharing his experiences about the shooting, Ricky said Manpower was not a problem since SGPC secretary Sardar Dalmegh Singh sent us busloads of about 200 people. We also hired people locally for the shooting. The biggest problem was encountered from the owners of horses, which werer hired for the shoots. These people were the most difficult to handle.

The elephants were hired from Ambala and Ludhiana areas. Each elephant consumed about 3.5 quintals of sugarcane every day and there were six people handling each elephant. It was a big task satisfying them. The canons, guns, shields, protective iron mess, swords, bows, arrows, helmets, costumes, etc were all purchased by us and the horses and elephants were hired.