Written by fe Bureau | New Delhi | Updated: Feb 26 2011, 08:13am hrs
Emphasising that both primary and higher education should realise the demographic dividend, the Economic Survey has called for drastic reforms in the education sector in terms of achievements and speed.

Highlighting that the expenditure on education as a proportion of total expenditure has increased marginally from 10% in 2005-06 to 11.3% in 2010-11 (budgeted estimates), it said, While a skilled, trained and healthy young population with the right type of education is an asset, an uneducated or ill educated, unskilled, less healthy, and unemployed population could lead to a demographic disaster. Reaping the demographic dividend needs a vision, a long-term plan and bold decisions.

On primary education, the Survey said that the right to education act (RTE Act) should not face implementation deficit. About 60% of the 13,000 schools satisfy the infrastructure norms specified by the RTE. However, more than half of these schools will need more teachers. A third will need more classrooms, the Survey noted. In 2010, 96.5% of children in the 6 to 14 age group in rural India were enrolled in school. Of this, 71.1% were enrolled in government schools and 24.3 % in private schools. 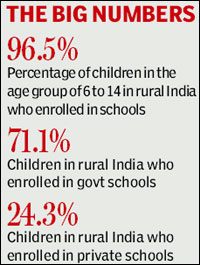 Interestingly, the best performer in terms of gross enrolment ratio (GER) for elementary education was Jharkhand, followed by Madhya Pradesh, Chhattisgarh and Gujarat and the worst performers were Haryana, Kerala and Punjab which were the best performers in many other areas. This may be due to overage children studying in primary schools in backwards states and double entry of data in some states. The GER for secondary education was highest in Himachal Pradesh, Tamil Nadu, Kerala, and Madhya Pradesh while Bihar was the worst performing state. The Survey asked for similar reforms in university and higher education to correct the demand-supply mismatch in the job market. Mobilization of funds for higher education is indeed a challenge for the government. The gap in available resources could possibly be met by a tailor-made Public-Private Partnership mode of funding without diluting the regulatory oversight of the government, it said.