3G auction only next fiscal

Written by Anandita Singh Mankotia | New Delhi | Updated: Jan 30 2010, 06:36am hrs
The much-delayed 3G spectrum auction has been put off until next financial year and may now be held only in August-September. The development comes after the law ministry suggested that auctions be held only once spectrum is entirely available with the government, to shield against possible legal complications.

While a few cash-strapped operators may welcome the postponement, on the whole it comes as bad news for the Indian telecom industry, consumers and the government. The industry will now have to wait for more than a year to roll out data-heavy services, which it badly needs to shore up falling margins on voice services at rock-bottom tariffs. 2G spectrum allocation is already on hold because of regulatory issues.

For consumers, the delay only prolongs an already five-year wait for much-anticipated 3G services such as mobile television, although state-owned BSNL and MTNL have been allotted spectrum and have launched their services.

As for the government, which had budgeted Rs 35,000 crore from 3G bids, it will now have to look for alternate ways to bridge the high 6.8% fiscal deficit this fiscal. At the last meeting of the empowered group of ministers (eGoM), finance minister Pranab Mukherjee had categorically told his Cabinet colleagues that a delay in realising the 3G bid amounts could force him to cut their budgetary allocations.

The auction delay comes as a surprise, as only last week the finance ministry had eased fund-raising norms for operators hoping to bid for 3G spectrum, allowing them to refinance their domestic debt though external commercial borrowings. 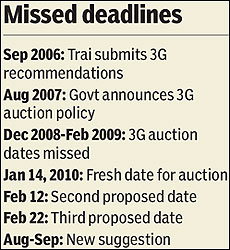 However, on the upside, the delay will give regulator Trai time to complete its 2G guidelines on spectrum sharing, trading and auctions. This could help prospective 3G bidders make more informed decisions.

As already reported by FE, last week the department of telecommunications (DoT) had sent a draft notice inviting applications (NIA) to the law ministry for vetting. The draft had suggested that auctions be held in February and that spectrum be allotted to successful bidders in September. It said, should there be a delay on the part of the government in allotting spectrum beyond the contracted date suitable compensation would be paid.

Sources said that the law ministry opposed this suggestion of compensation and felt that auctions be held only once defence vacates the required spectrum by August-September to avoid legal complications. The compensation entailed refunding the entire bid amount along with compound interest.

This would be huge, since the reserve price for all-India spectrum is Rs 3,500 crore.

When contacted, law minister Veerappa Moily, told FE that his ministry had sent its recommendations to the finance ministry. However, Moily did not divulge what that view was. An official announcement of postponement would come once the eGoM gives its formal assent. Moily is also a member of the eGoM. Sources said given the delays so far, it would have been difficult for the government to conclude the 3G auctions this fiscal, anyway.

Had the government come out with the NIAthe legal document detailing the auction detailsby January 31, it stood a slim chance of completing the process and realising payments by March 31. Even if the finance ministry disagrees with the view of the law ministry, the NIA cannot come out in ten days, so any auction this fiscal is ruled out, said an official.

Ideally, DoT wanted to hold auctions for four slots in all 22 circles of the country. An additional slot has already been given to BSNL/MTNL. However, due to the lack of spectrum, DoT had suggested that four slots be auctioned in five circles and only three in the remaining ones.

Defence has refused to vacate the spectrum so far because it has linked it to progress on its dedicated optic fibre network, which is being built by DoT. However, it is not even using the spectrum that it is refusing to vacate. As highlighted by FE, neither the attempts of the eGoM and the PMs advisor on infrastructure, Sam Pitroda, nor the financial compulsions of the government were able to wrest spectrum from defence on time. The 3G spectrum auction has been delayed now for over a year and a half.