Those who thought that distance education was pass are in for a surprise as close to one-fourth of the country's students are getting educated through the distance mode.

The Open Distance Learning (ODL) system, also known as Distance Education (DE) system, has evolved as one of the effective modes of education and training as the overall annual growth in enrollment between 1975-76 and 2008-09 was 5.6% for the conventional system, while it was 16.3% in the ODL system. 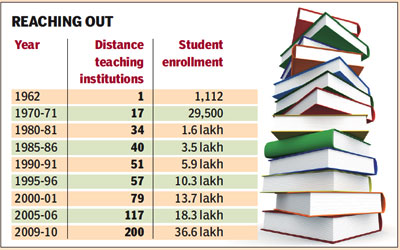 In fact, the enrollment in distance education has been increasing approximately at the rate of more than 10% in last two decades. Enrollment in Open Universities (OUs) and Distance Education Institutions (DEI) has increased steadily at a higher pace than in conventional programmes.

At present, close to 24% of all enrollments are in the ODL system and growing fast because of the reach of this mode and the opportunities it gives to those who are already employed and seek to enhance their qualifications, Prof V N Rajasekharan Pillai, former vice chancellor of IGNOU and member of the committee told FE.

Interestingly, the contribution of ODL to gross enrolment ratio (GER) in higher education has risen to about 22%.

Numbers favour distance education despite the general mindblock against it something that experts say is developing a skilled labour force in the country.

A TeamLease study recently said 58% of India's youth suffer some degree of skill deprivation as the higher education system lacks flexibility (in entry, exit and re-entry). This, it says, can be scaled up in quality and reach only by creating competition with transparent regulation, legitimising distance education, legitimising private ownership, creating, recognising and legitimising vertical mobility among short-term certificates and medium-term diplomas by paying more attention to school-level education, fostering PPP models and deregulating higher education and study centre frameworks. Tweaking the skill and employment ecosystem is also required, it says.

A very small proportion, almost 0.7% of the total number of students, in conventional system are enrolled for research. Out of the total research students (0.83 lakh), 86% are in the universities. There were 954 PhD students in open universities prior to UGC notification not allowing research programme through distance mode.